Showing posts from April, 2019
Show all

Debugging ANSRTrack – Part 3 Filed in ANSR Tracker on Apr.04, 2019 Unexplained Rotator Movement There is one final problem noted during the inaugural flight with the new ANSRTrack Ground Station program. At a point about 30 – 45 minutes into the flight, the ground station received an APRS beacon from the balloon, on its normal 30 second interval. The azimuth rotor suddenly rotated about 45 degrees counterclockwise from its prior position. As I looked at the screen to determine what might have happened, we received another beacon, and the azimuth control returned to where it should have been pointing. This twice. Once at about 36 minutes into the flight, and once at about 42 minutes into the flight.   There are a couple of possible causes for this action. We may have received a bad packet from the APRS beacon on the balloon. We may have calculated the wrong bearing to the balloon for those two packets. There may be a communication problem at the
Post a Comment
Read more 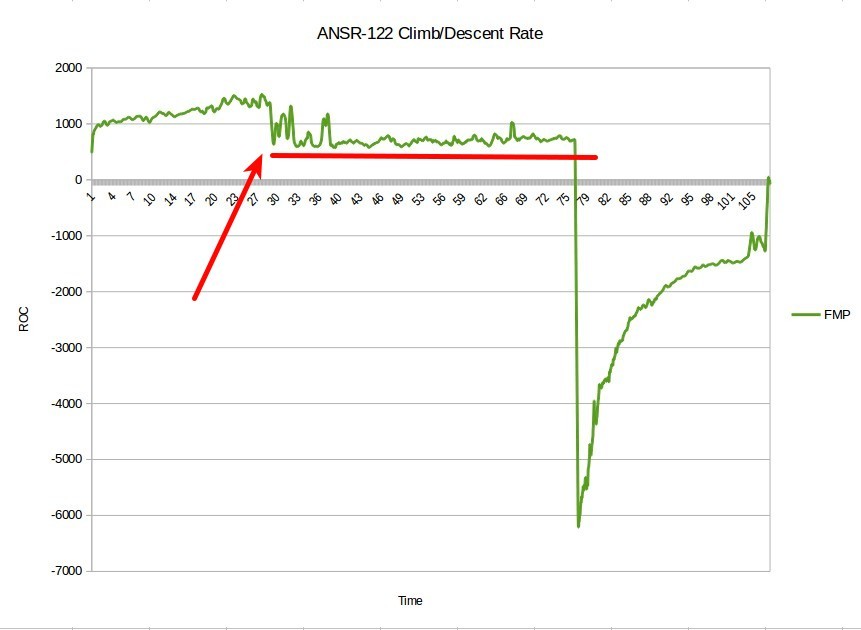 Debugging ANSRTrack Cont’ Filed in ANSR Tracker on Apr.02, 2019 Continued Debugging effort The next anomoly to investigate concerned the slow climb rate observed during the ANSR-122 flight. Normally, we expect about 1200 – 1300 feet per minute climb rate, but a rate of 600 fpm was observed about a half hour into the flight. An analysis of the telemetry data from our two beacons (KA7NSR-6 and KA7NSR-7) indicate that the climb rate did indeed fall to around 600 fpm at that time in the flight.   Climb & Descent Rate for entire flight   Rate of Climb for Ascent Phase of Flight   And so I conclude that the ANSRTrack program was reporting the climb rate correctly. Nothing to fix on this one… The final anomaly to investigate concerned the sudden repositioning of the antenna array twice during the flight. The array swung perhaps 45 degrees counterclockwise after a telemetry update at around 36 and 42 minutes into the flight (give or take a few minutes
Post a Comment
Read more

Debugging ANSRTrack Filed in ANSR Tracker on Apr.02, 2019 Tracking down some bugs As mentioned in my previous post, there were a few anomolies when I ran the new ANSRTrack program during a live flight. In this post, we will track down a couple of the issues: There was a consistent error showing up at the bottom of the screen mainwindow: Update call to move rotator() failed. This was happening consistently enough to quickly overwrite any other valid messages that should have appeared in that space. In looking at the code, I looked at the moveRotator() function and found the following code where the status is returned: if(status == false) //qDebug() << "command:" << command << "\tazimuth:" << azimuth; return status; When I compile this code, I get a warning message: I had written the debug statement, but later commented it out, because I was no longer in a debug mode. Apparently, since the debug statement
Post a Comment
Read more
More posts