Showing posts from May, 2011
Show all

Choke Self-Resonance Filed in homebrew on May.28, 2011 In troubleshooting the matching network for my 43′ vertical antenna, I discovered that somewhere along the way, the RF-blocking choke in the matching network had overheated and melted all of its insulation off, shorting all of the turns together.  I suspect that this was caused by the wiring errors I discovered earlier, but I did find references ( here ) on the internet saying that the 100 uh chokes from Radio Shack have some series self-resonance that cause them to leak RF through at certain frequencies. I read elsewhere (don’t remember where) that removing the top layer of the coil can improve things a bit.  So I re-wound the coil with just one layer of windings, resulting in a 50 uh coil, rather than 100 uh.  The following experiment shows that the new coil does not appear to have any significant self-resonance between 1.5 and 30 mhz.  However, I’m not sure the 50 uh is going to give enough inductance at 160 me
Post a Comment
Read more 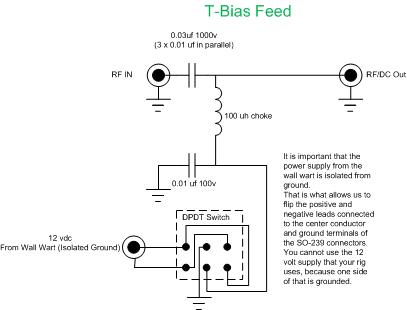 T-Bias interface Filed in Antennas on May.28, 2011 I had a comment a few weeks ago asking for more details about the T-Bias device used to send DC over the active RF coax to my 43′ vertical antenna. This is used to switch the matching network such that: 0 volts = 60 – 6 meter operation +12 volts = 80 meter operation -12 volts = 160 meter operation I based the design on the one from Phil, AD5X, on his website: http://www.ad5x.com/images/Articles/RemoteDC.pdf Here is my design:   T-Bias schematic The photo shows that I used the parallel capacitors to get the 0.03 uf feedthrough capacitance.  The RF choke is a Radio Shack 100 uh standard choke.   T-Bias (Shack End) Here you can see how I kept the 12 volt input from the wall wart isolated from the chassis, allowing me to use the switch to flip polarity as needed. I mounted the connector on a piece of fiberglass circuit board (no copper).  Then I riveted the fiberglass to the chassis. 12 volt isolated connector
Post a Comment
Read more
More posts