The TC-1 Tube Tester is now fully disassembled.  Now we begin to clean up individual parts and reassemble.

I started with cleaning up the tube sockets, by removing the old solder and boiling them for 15 minutes in a 50 -50 mixture of white vinegar and water.  That removed the old solder flux that was caked on.  The sockets were then reinstalled onto the panel, using the wavy rings that I had cleaned up to hold them in place. I was careful to look at pictures I had taken before disassembly, to insure I put them back in with the same orientation.  The manual was not very clear on the proper orientation.

Next, I cleaned up the ON/OFF switch by using Deoxit on the contacts. 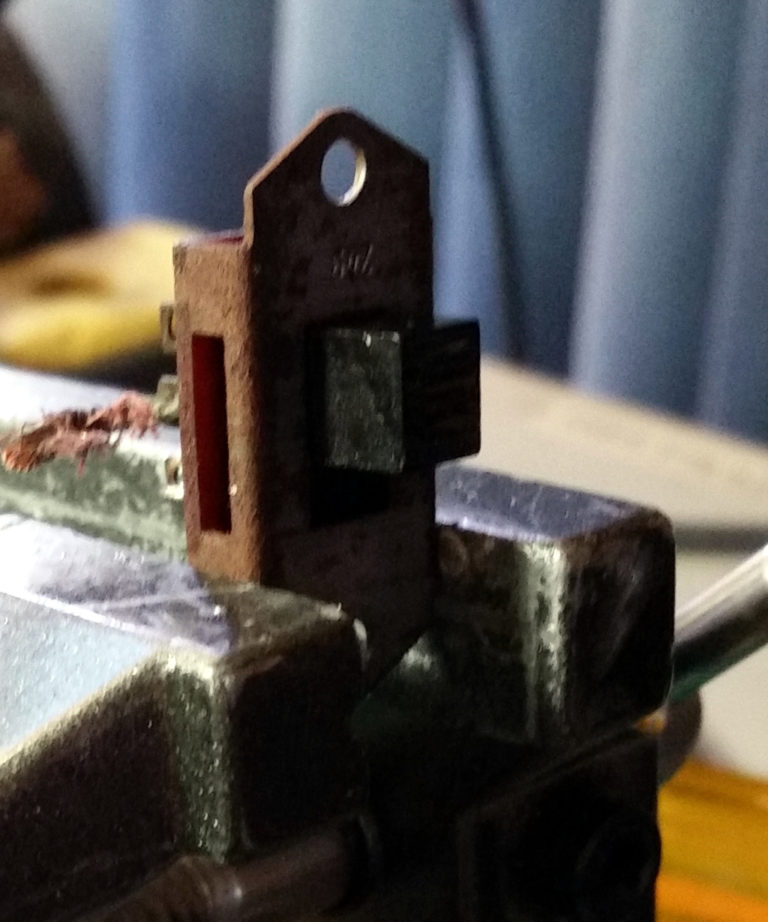 Then I used a wire brush to remove most of the rust/corrosion from the exterior. 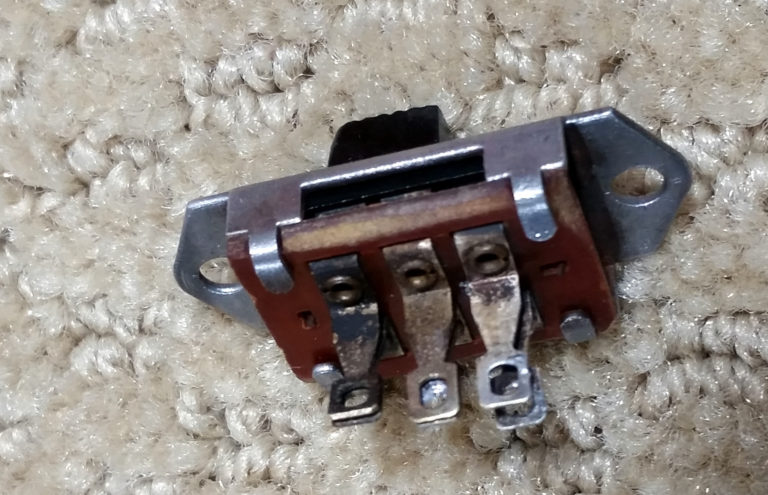 Then I mounted it to the panel using the cleaned hardware. 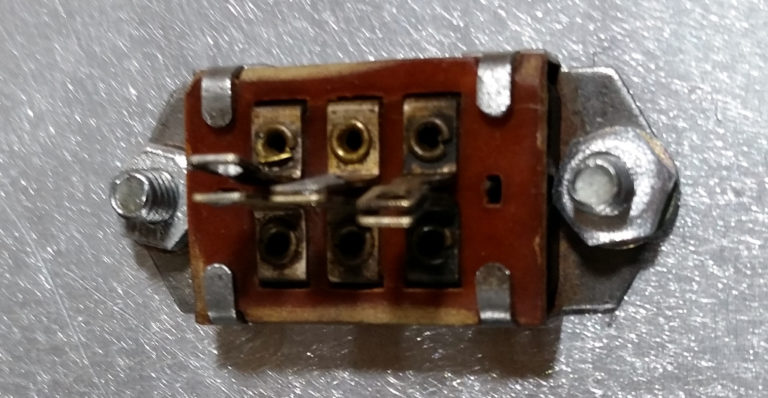 After the ON/OFF switch, I continued on with the cleanup of the filament selector switch. 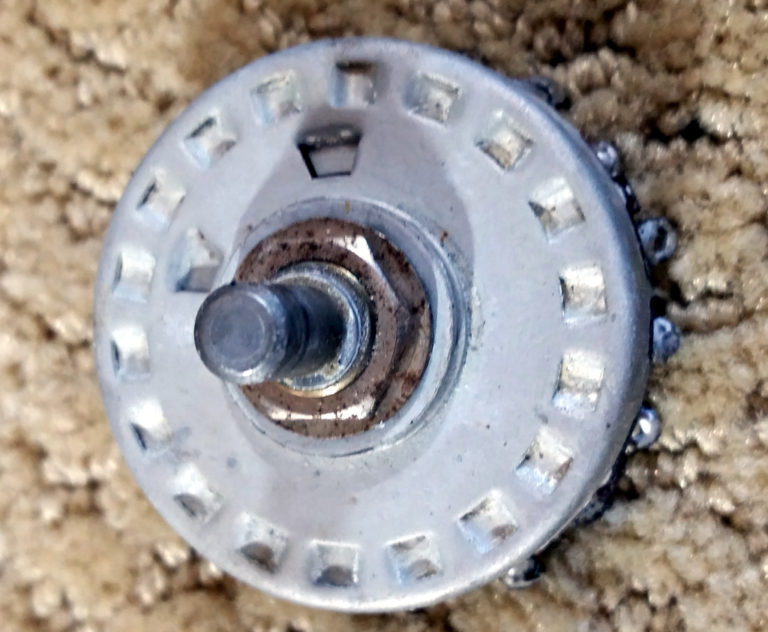 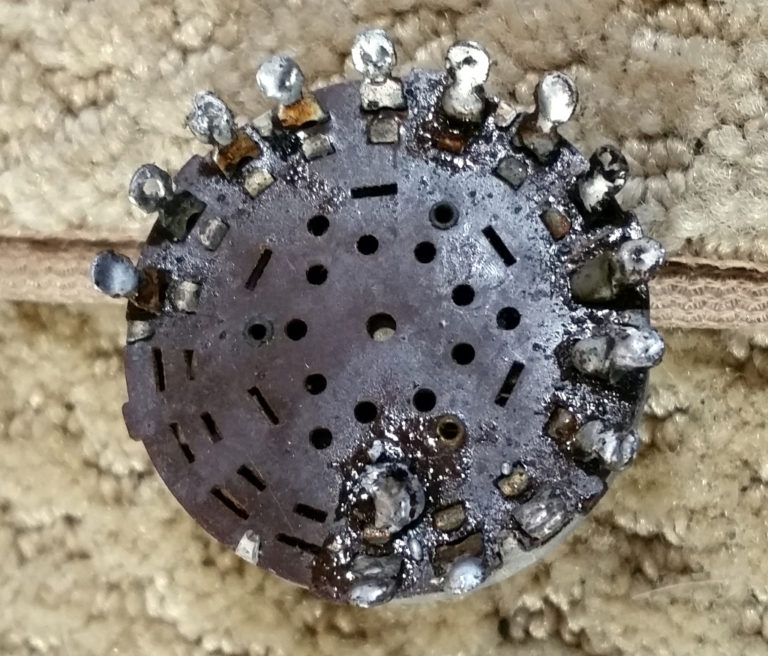 I wanted to get inside the switch to clean up the contacts, so I took it apart and cleaned the contact area with Deoxit.  Then I gave it the vinegar/water boil bath treatment, and reassembled it. 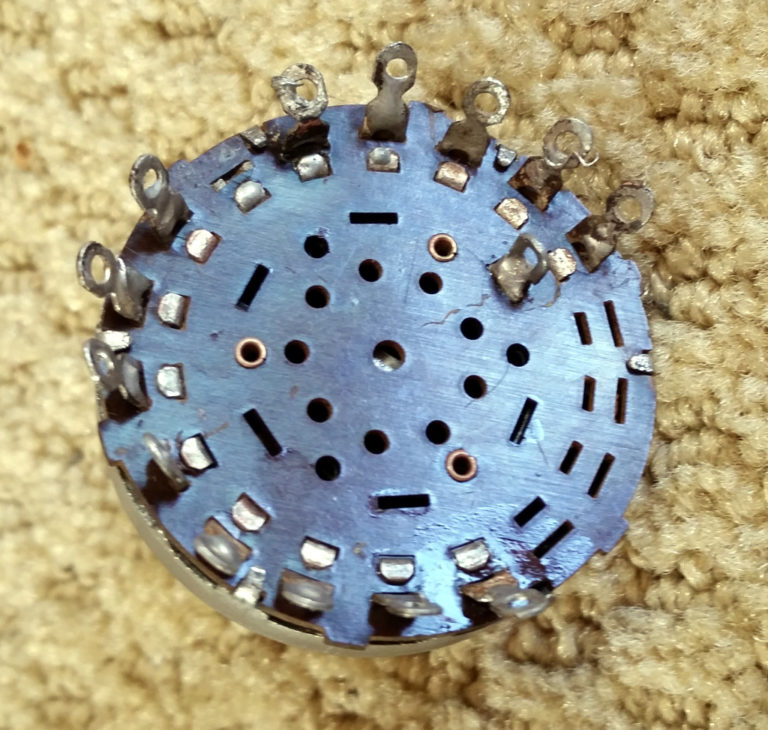 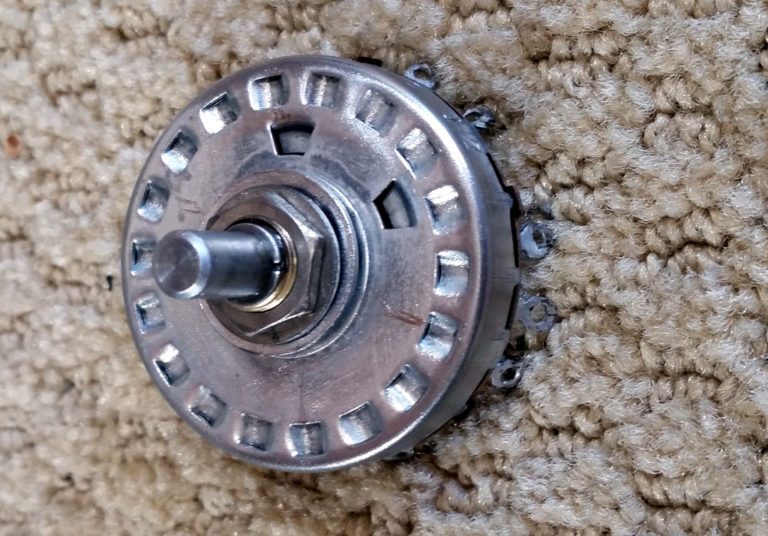 After cleaning the switch up, I mounted it to the panel, and began installing the wires from the transformer.  One of the contacts had been bent once too often and broke off, so I soldered that wire to what was left of the contact on the back of the switch.  It feels solid, so I don’t think there will be a problem. 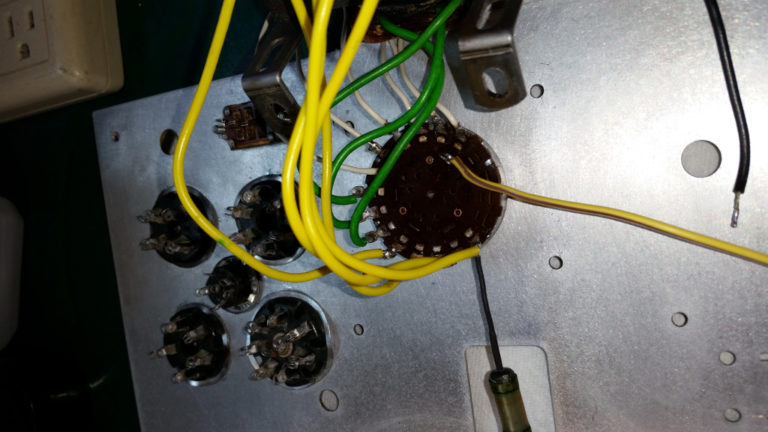 Next, with all of the transformer wires soldered to the switch, I checked the 75K resistor out, which was still in good shape.  I removed the old spaghetti tubing from the leads and replaced it with heat shrink tubing.  After soldering the resistor to the filament switch, I mounted the transformer over the switch. 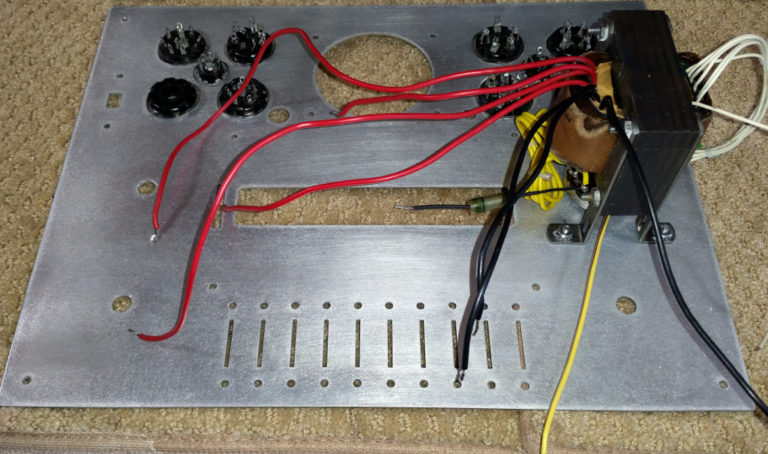 Next, I cleaned and reinstalled the Line Voltage rheostat to the panel. 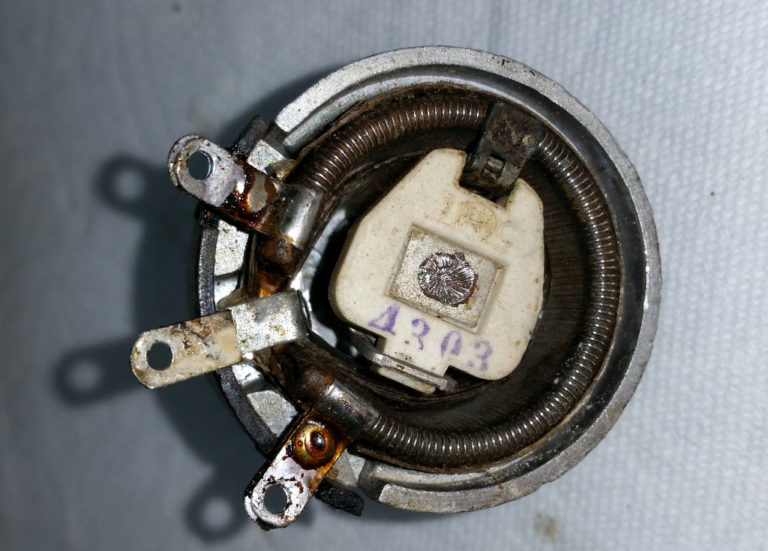 Next on the list was to clean up all 10 of the lever switches.  I followed the same process of wire brushing and vinegar/water bath, followed by scrubbing with soapy water and rinse. Deoxit on the contacts completed the refurbishment. 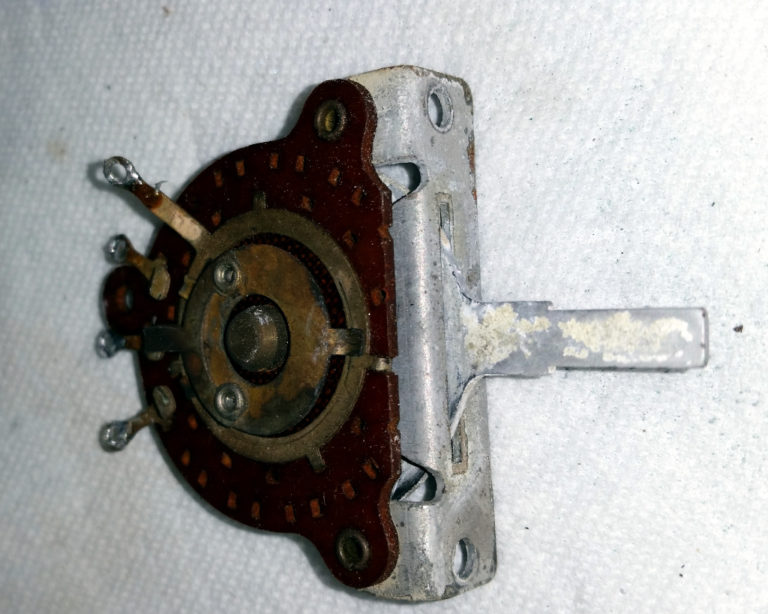 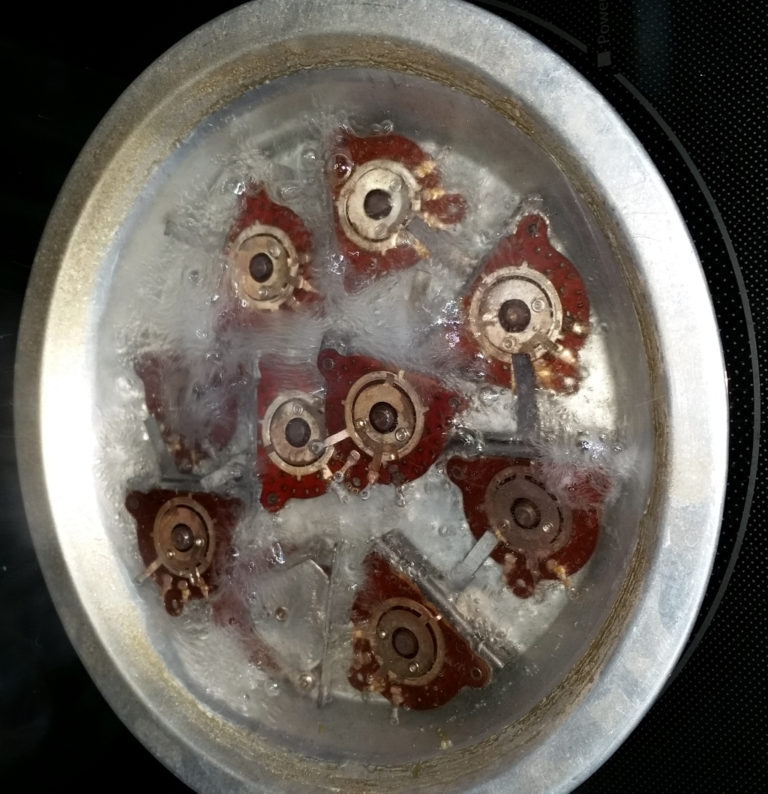 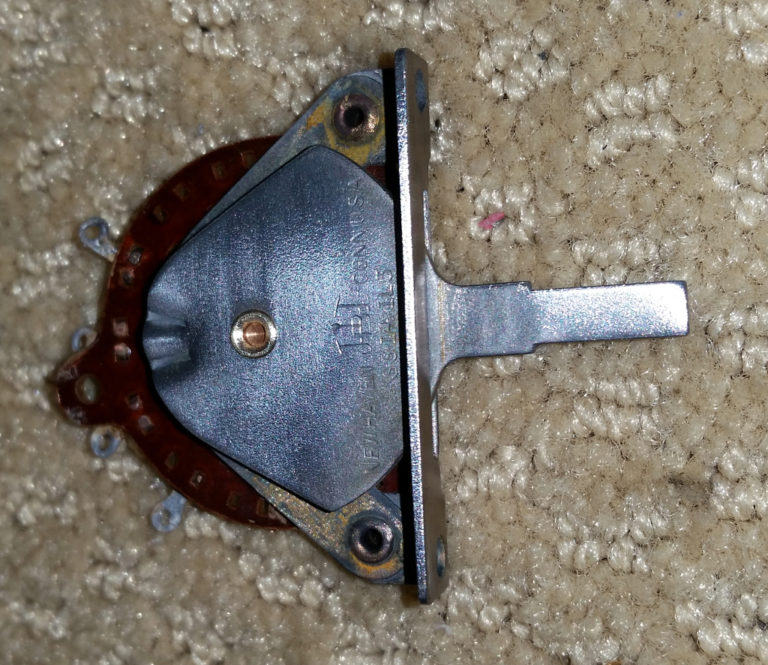 After cleanup, all 10 lever switches were installed with cleaned up hardware. 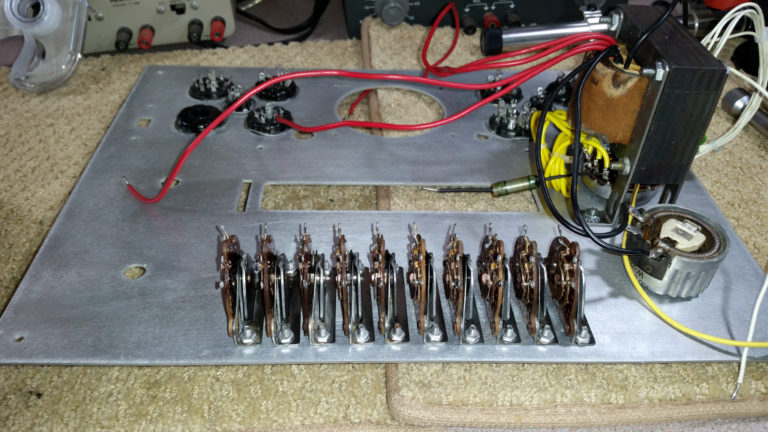