Next on the repair plan is to pull the 3-section electrolytic can capacitor, and re-stuff it with modern electrolytic capacitors.  This will ensure reliable operation for decades into the future, while preserving the looks of the old equipment.  I unsoldered the two resistors, the .05 uf capacitor and the various wires from the terminals of the can, being careful to note what each terminal had for connections.  Once that was done, I was able to unscrew the two screws holding the can to the chassis, and remove the can. Electrolytic Can Capacitor removed from chassis

The can bracket lifted off, after un-twisting the four tabs on the can.

I worked for about a half hour, attempting to uncrimp the edge of the aluminum can from the bottom.  I tried a pocket knife and a small screwdriver, but I got nowhere in that endeavor.  Finally, I changed the plan and decided to cut the bottom off by grinding on the bottom edge until the steel ring was exposed.  The plan is to use an epoxy to glue it back together, rather than re-crimping the edge. 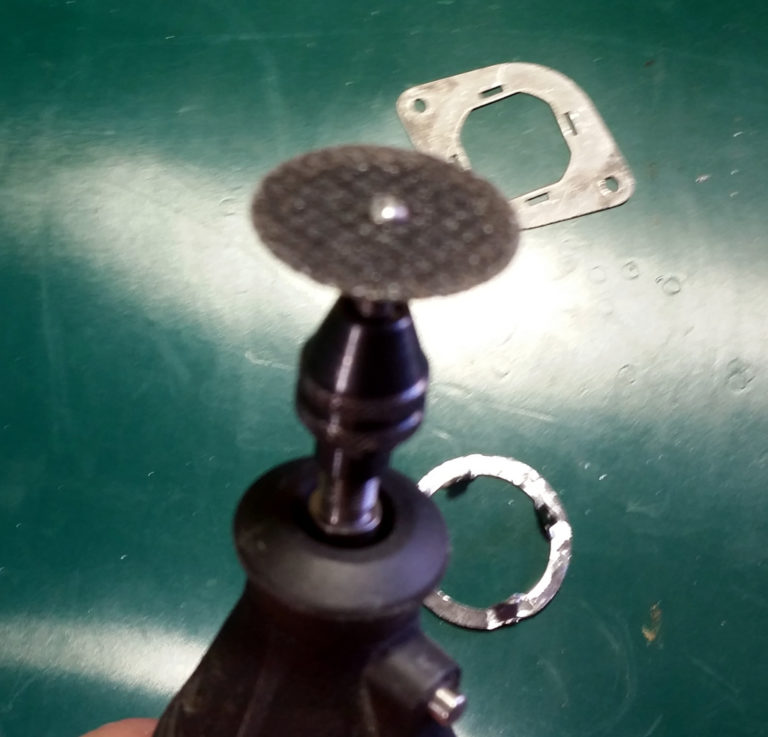 Bottom edge ground off, exposing the steel ring underneath.

Once the edge was ground down I was able to simply lift the steel ring off. With the steel ring out of the way, I applied hot air with an embossing gun all over the outside case of the capacitor.  I stopped every thirty seconds or so, pulling gently on the terminals to see if the inside would pull out.  After a couple of minutes, they did. (Note** Be careful doing this, as you can pull the terminals right out of the bottom of the capacitor if you apply too much pressure.  The heat is to soften the tar inside the can, so it will let go of the parts inside.) 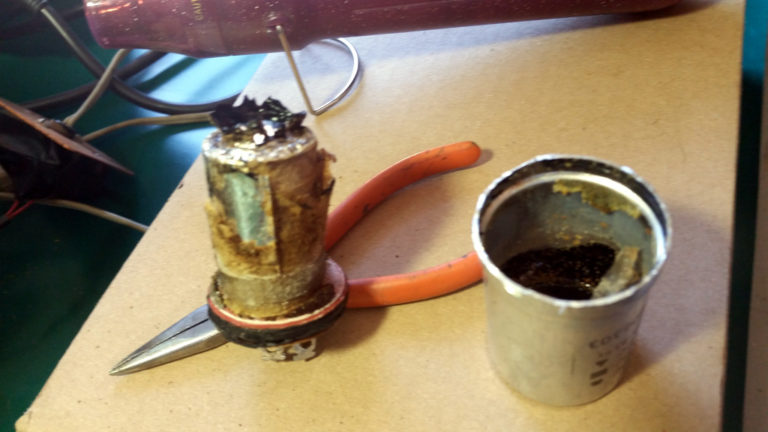 Next, I unrolled the foil and paper from the bottom of the capacitor.  This one was very dry, whereas others I have done have still had some liquid electrolyte wetting the paper.  So this one was in pretty bad shape. 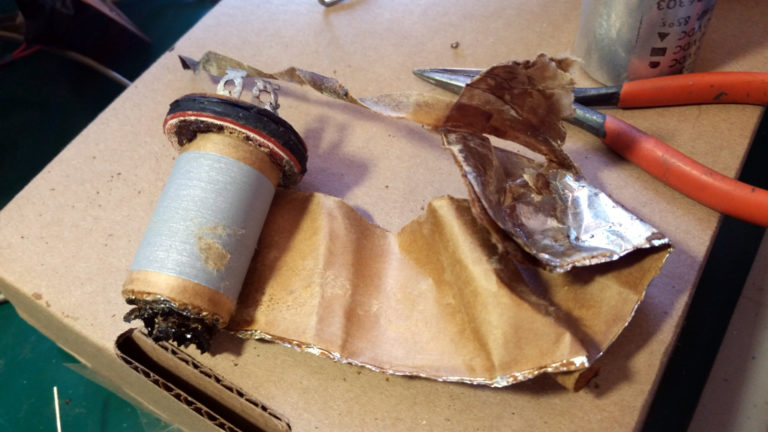 Unrolling the paper and foil layers

When I got near the end of the roll, I started running into the three terminals that connect to the capacitor sections.  I just kept unrolling until all the paper and foil were off. 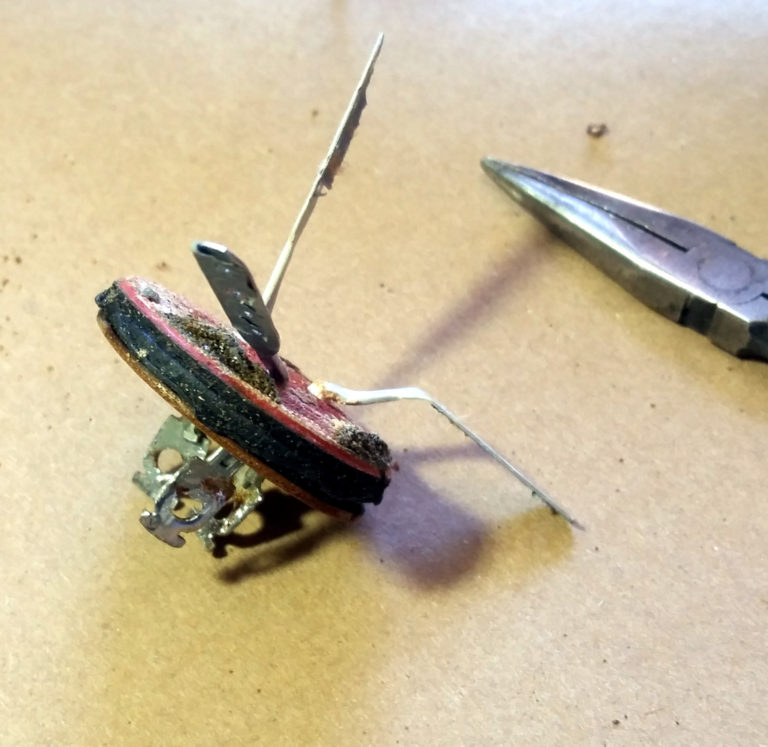 All paper and foil removed.

I cleaned the inside of the can out with some mineral spirits and brake cleaner.  It probably wasn’t necessary, but I like it clean. 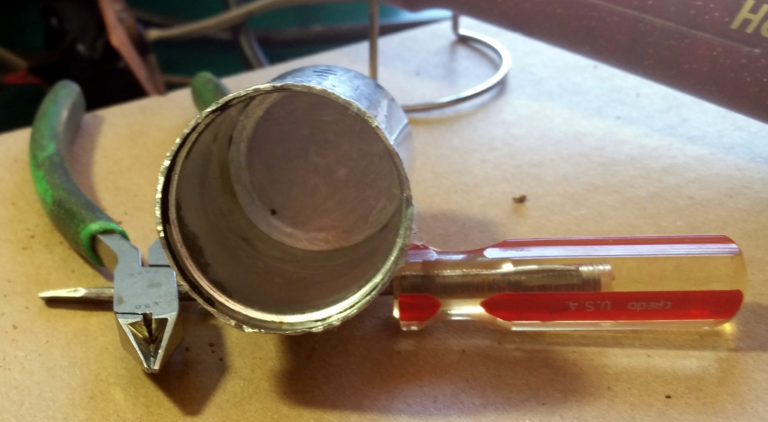 Next, I prepared three modern electrolytic capacitors by soldering their negative leads together to form one pigtail, and arranging them such that they would exit the can in roughly the same positions as the original values. 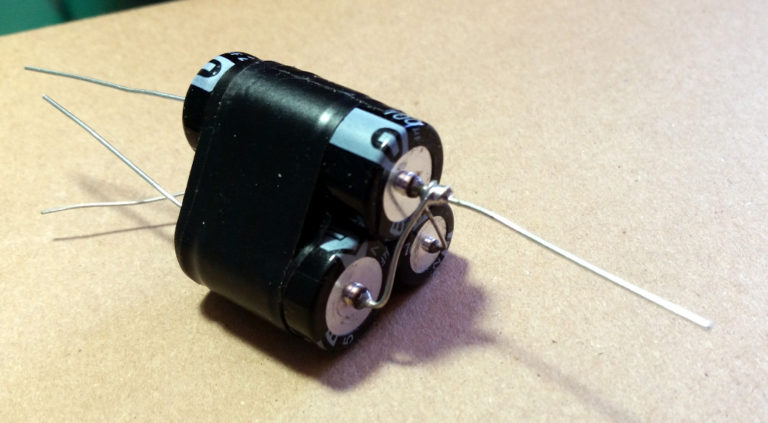 Then I drilled four small holes for the leads to exit the top, placing them near the terminals where they would attach. The leads cannot be soldered to the terminals on the underside, because that part of the terminal is aluminum, and won’t accept solder.  So I just cut the terminals on that side down short and bent them over for some mechanical strength. 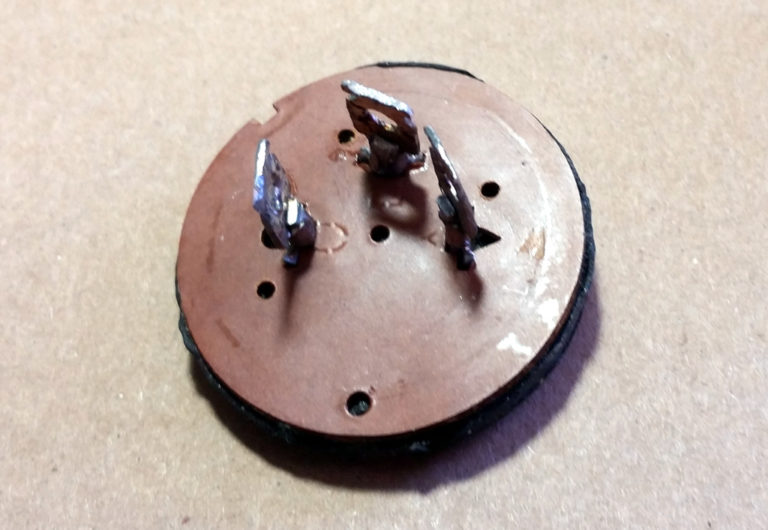 I should have drilled the holes a little closer to the center, as the leads are a little close to the attaching hardware where I placed them.  There is still enough clearance so that they won’t short to ground, but it would have been better to have more.

The capacitors were placed inside the can, and their leads fed through the four holes.  The ground lead will attach to one of the twist locks when the mounting ring is reattached. 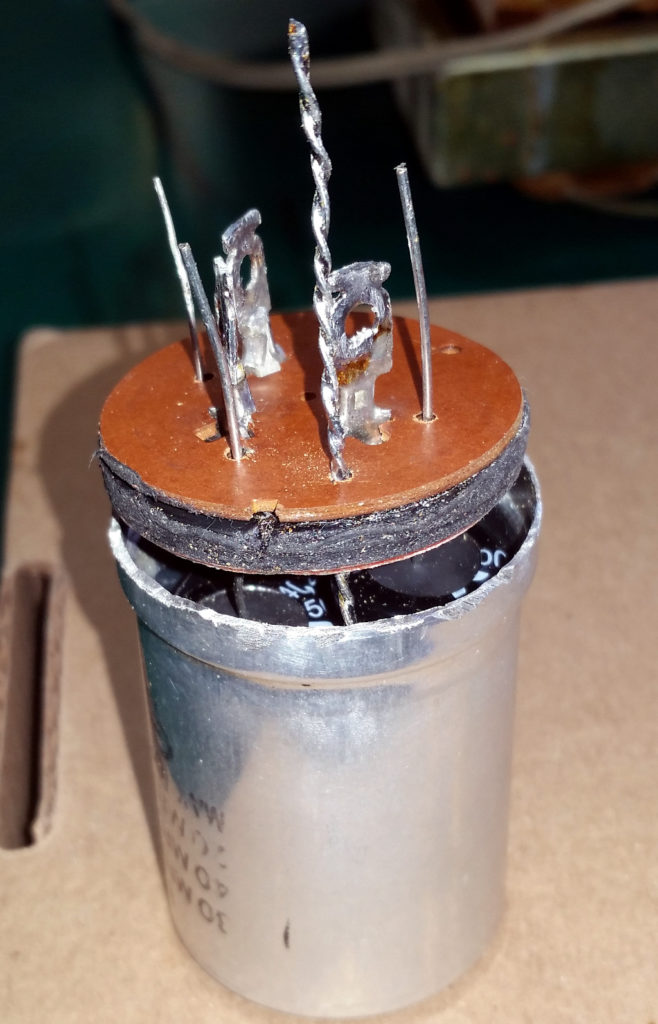 New caps in can

Next, the bottom of the cap was glued back into place, with a two part epoxy to hold it.  I clamped everything together and left it overnight to harden. 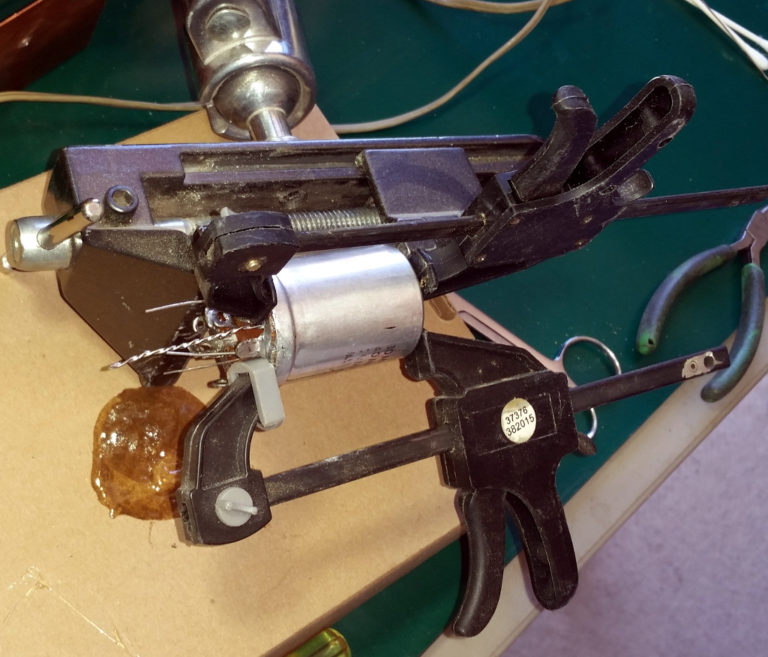 Gluing the bottom to the can

I used my dremel to grind away the excess epoxy on the outside.  This is before cleaning the assembly off. 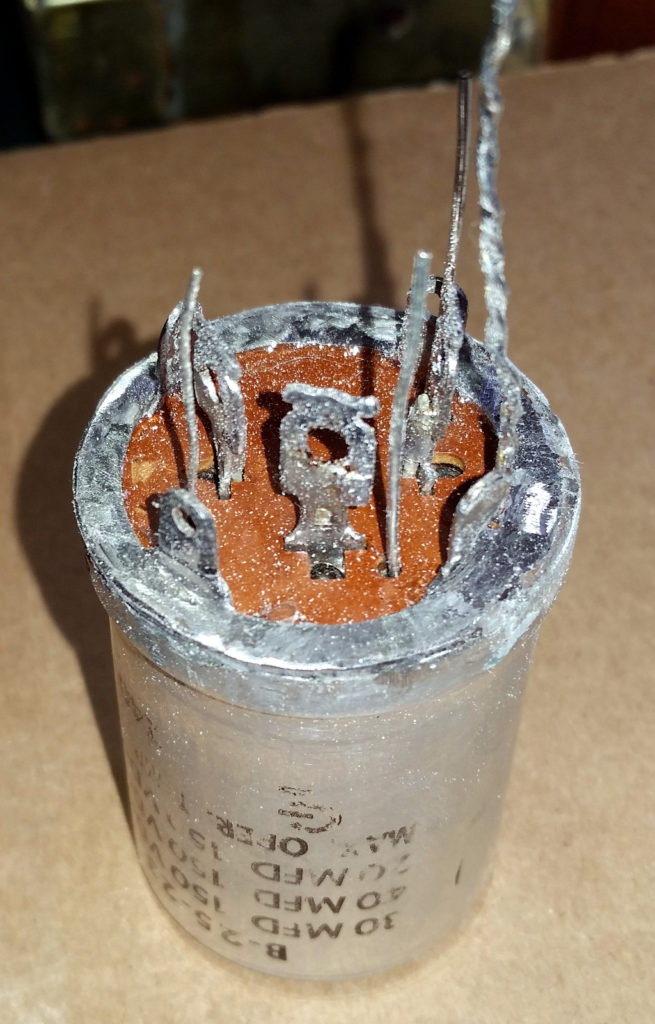 Then I soldered the leads to their correct terminals, and the ground lead to the steel ring. 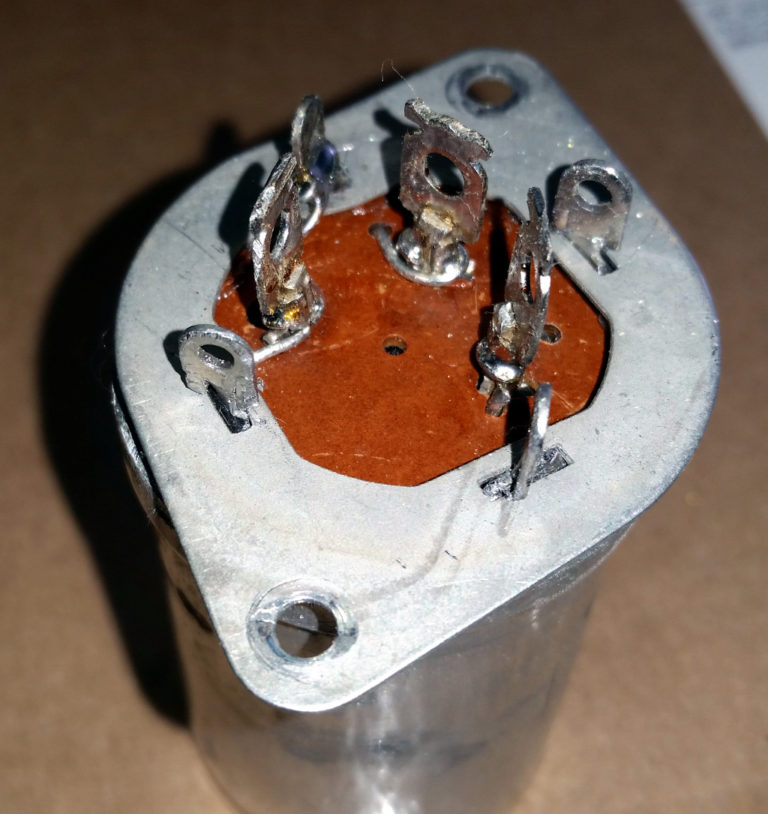 Finally, I mounted the can back to the chassis, and reattached the various resistors, capacitors and leads to the terminals they had been removed from. 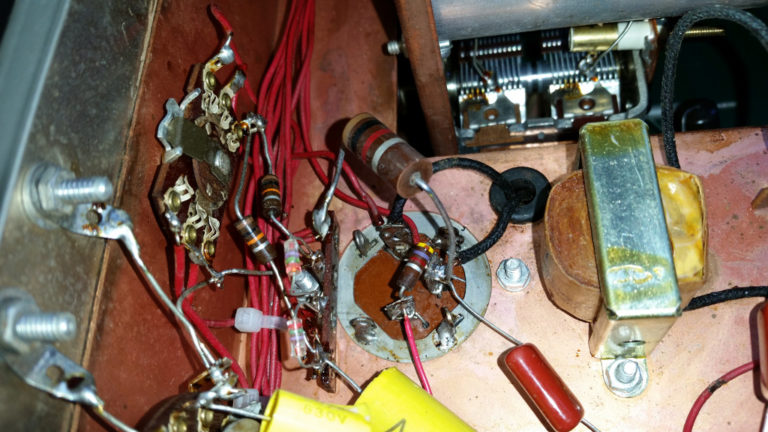 Can mounted back into chassis

Here is a view of the newly re-stuffed can from the top. 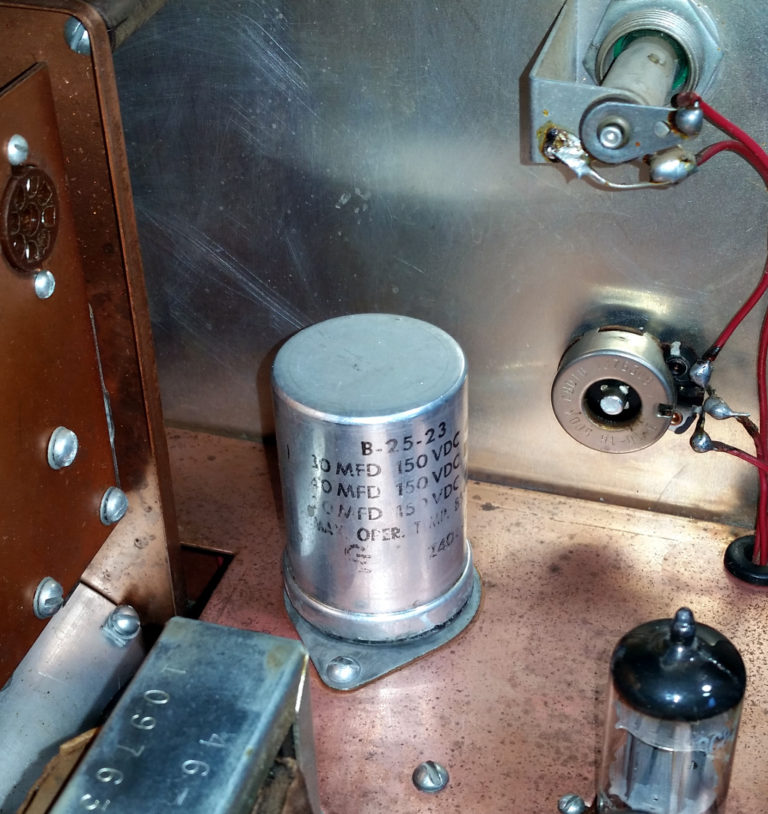 “New” electrolytic can capacitor in place

ERC-4 Interface & My HyGain Ham-IV Rotator Controller – Part 3 Filed in Antennas on Jul.29, 2021 Installation My HyGain Ham-IV rotator was built in 2016. The control box has changed in its layout over the years. In the documentation from the CD, the picture of the Ham-IV shows that the meter board is installed vertically behind the meter. In my version, it is installed horizontally (parallel to the chassis surface) on the switch side of the cabinet. Since this is where the ERC-4 was supposed to be installed, I had to find a new location. I chose to install it in the space under the transformer. There really didn’t seem to be many options, but this location worked out well. There is plenty of space between the transformer and the cover of the cabinet. [ ] Choose a location to install the ERC-4 into the controller cabinet.   Mounting location for the ERC-4 There was some challenge to drilling the holes on the back plate. I didn’t feel
Read more