I saw a video today from one of the Youtube members that I subscribe to: Kevin Loughin KB9RLW.  In the video he was demonstrating how to use an oscilloscope and a signal generator to measure the impedance of a circuit ( in this case, it was simply a toroid coil).  The process made sense, but I was a little confused by his results.  He found that by decreasing the test frequency by half (10 Mhz down to 5 Mhz), his impedance went UP from 533 ohms to 2395 ohms!  I believe that is not reasonable, in that the impedance (inductive reactance, in this case) should have dropped by about half, to about 267 ohms.  Inductive reactance varies directly with frequency, not inversely, and not by 6 times with a simple halving of the test frequency.

So after checking all of the math, which seemed to be fine, I set up an experiment in my shop to check the results using the method Kevin was using.  Follow after the break to see my results… 
I started by checking other sources for a similar procedure.  I found a source at http://www.zen22142.zen.co.uk/Theory/inzoz.htm

So first, find the current through the resistor:

Since the resistor and the circuit under test are in series, the current must be the same through both.  So Now use the V2 measurement and the current to determine the impedance of the circuit:

The math appears to work out as I would expect it to.  So the basic procedure appears to be valid.

I built a spreadsheet and used Kevin’s measurements as input, and got the same results that he did.  But they still didn’t make sense.

So I set about duplicating the experiment here.  Since Kevin’s work pointed to a coil with 533 ohms of reactance at 10 mhz.

Let’s see, the formula for inductive reactance is Xl = 2*PI*F*L.  So dividing XL by (2*PI*F) should give us the inductance of the toroid.

Next, I measured the reactance of the coil with my MFJ-259B antenna analyzer at 5 mhz.  I found the coil to measure 246 ohms at that frequency. That is pretty close to the calculated 240 ohms from the XL=2*PI*F*L formula. 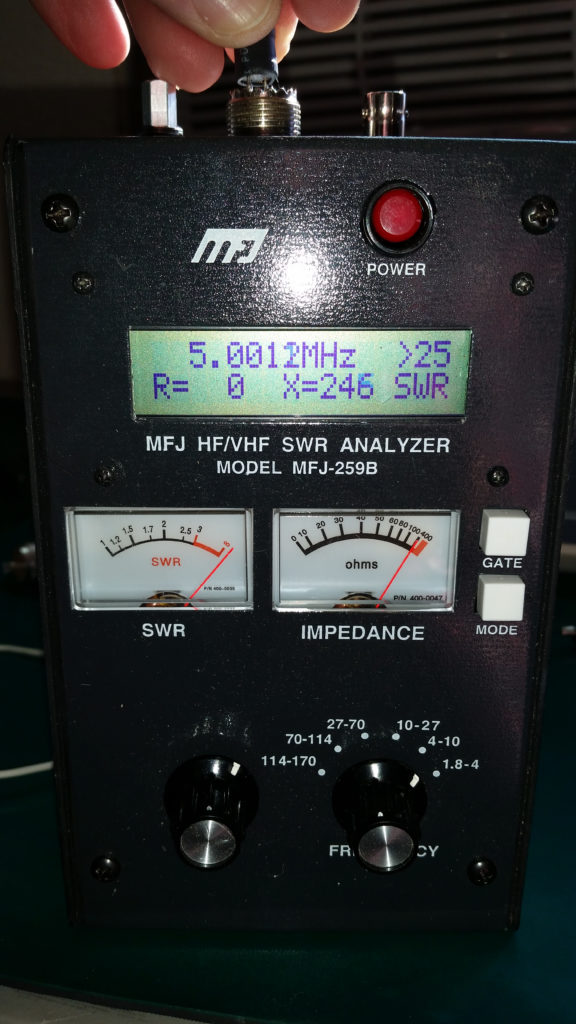 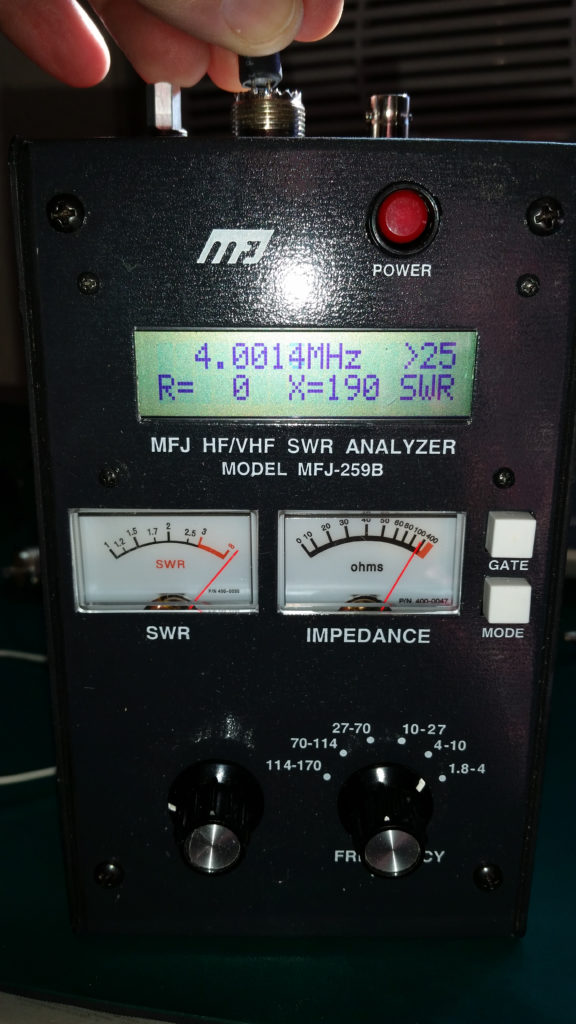 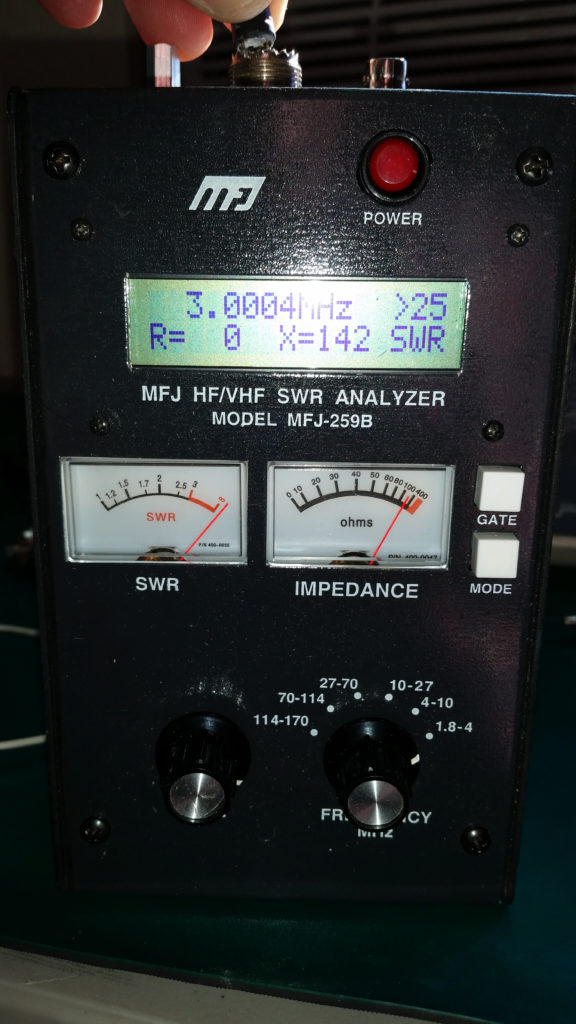 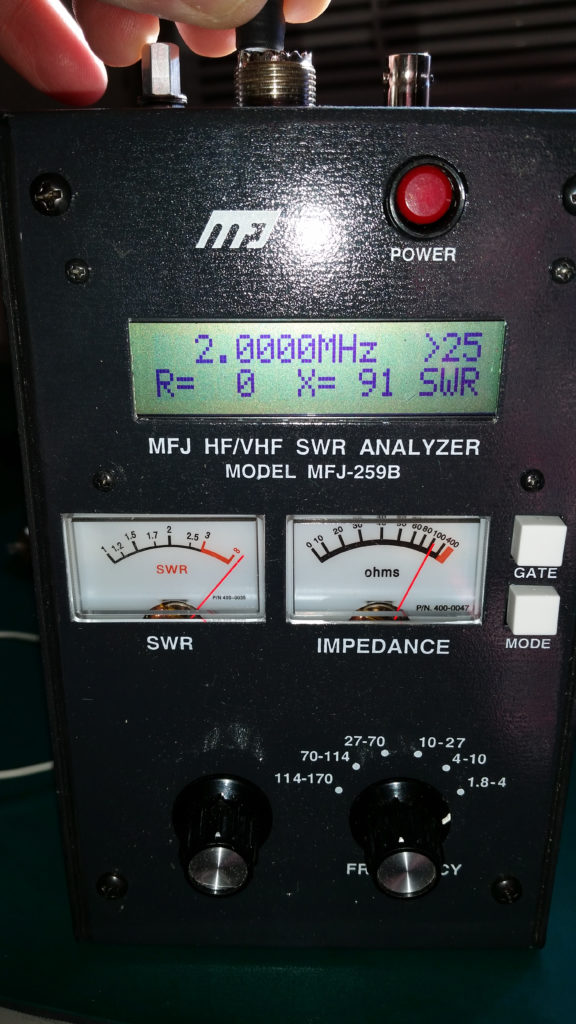 My MFJ analyzer could not read the reactance at 10 mhz for this coil, because it exceeded the 650 ohms limit of the analyzer.

So that confirmed for me that the impedance should go down as frequency goes down. Notice that the 2 Mhz reading is about half of the 4 Mhz reading.

Next, I built a jig to duplicate Kevin’s experiment.  I used a 1000 ohm resistor in series with the coil and took readings with my oscilloscope, duplicating Kevin’s test.

So why such a great error at higher frequencies?  I decided to continue the experiment, but using my Hewlett Packard 8640B signal generator as the source, rather than the antenna analyzer.  The results were nearly identical.  So it had nothing to do with the source.

Next, I thought that maybe the coil itself was flawed.  It’s possible that the capacitance between the windings, or core saturation, or something was contributing to the error.

I made a few more Xl calculations, and determined that a smaller coil of about 0.8 uh would result in measurements within the limits of my antenna analyzer. 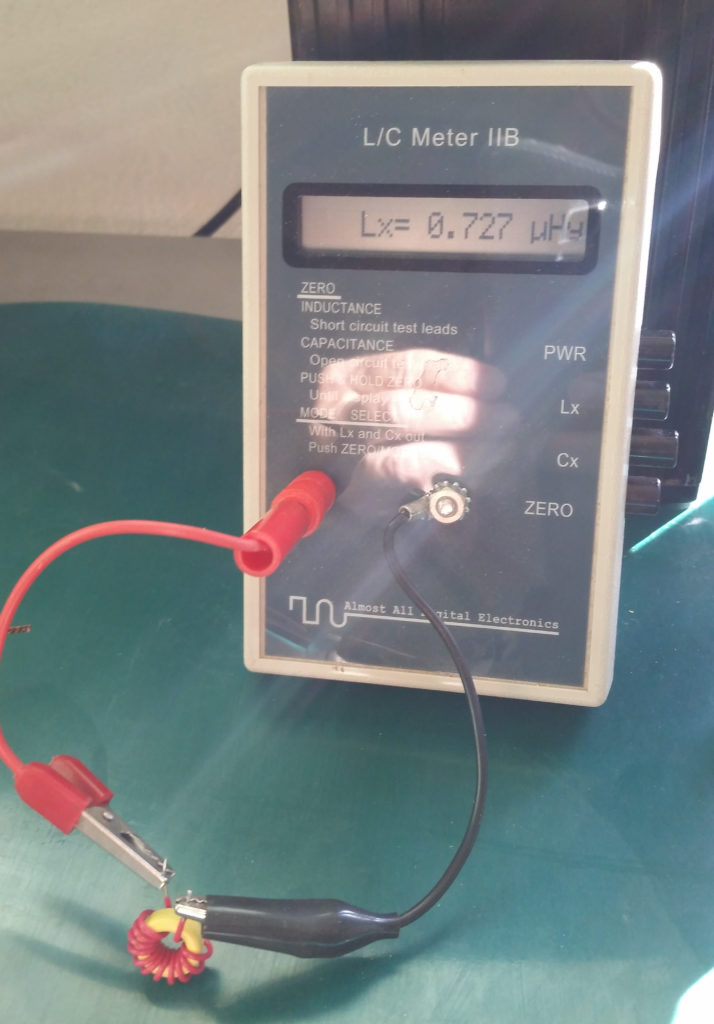 With this coil, the readings were more reasonable at the higher frequencies, good from 4 to 10 Mhz.

So what did I learn from all of this?  The method of using an oscilloscope and signal generator may be useful for finding the input impedance to a circuit or device, but try to make certain that you are testing at frequencies that are reasonable for the device.  For instance, it is probably not reasonable to use an 8 uh coil in a 10 Mhz circuit.  Stray capacitances, core saturation and maybe other effects may cause unexpected results.