After replacing the gearset in my 8640b signal generator, the next item on the list was to repair the FM Deviation potentiometer, which had the shaft broken off where the knob would attach to the front.

Since the pot is still electrically good, and I cannot locate another pot with the same value and length of control shaft, I thought that I could somehow repair the shaft.

My first attempt at this was to remove the old shaft at the potentiometer body, and replace it with a longer one. It looked like I could remove the retaining clip near the pot’s body, and perhaps the shaft would pull out. Unfortunately, after removing the retainer clip, the shaft remained held to the body, so that did not pan out. 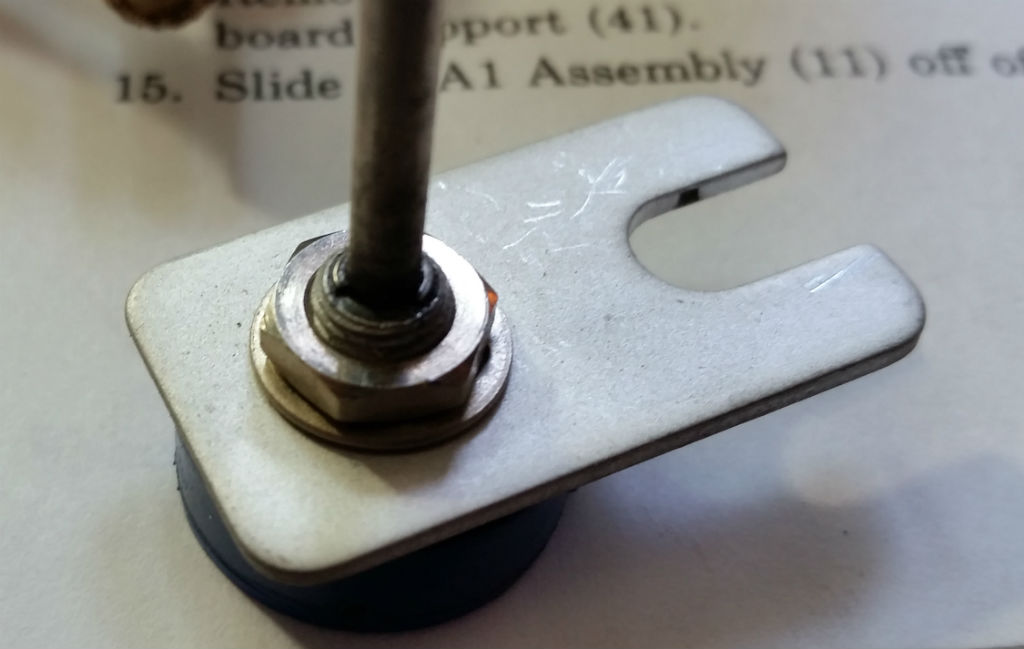 I put the retainer clip back on the shaft and proceeded with Plan B.

Plan B was to add a section of 1/8″ rod to the front of the shaft, using some mechanical fitting and some JB Weld Epoxy.

So I snugged the shaft up in my vice, and cut a slot in the end of it. 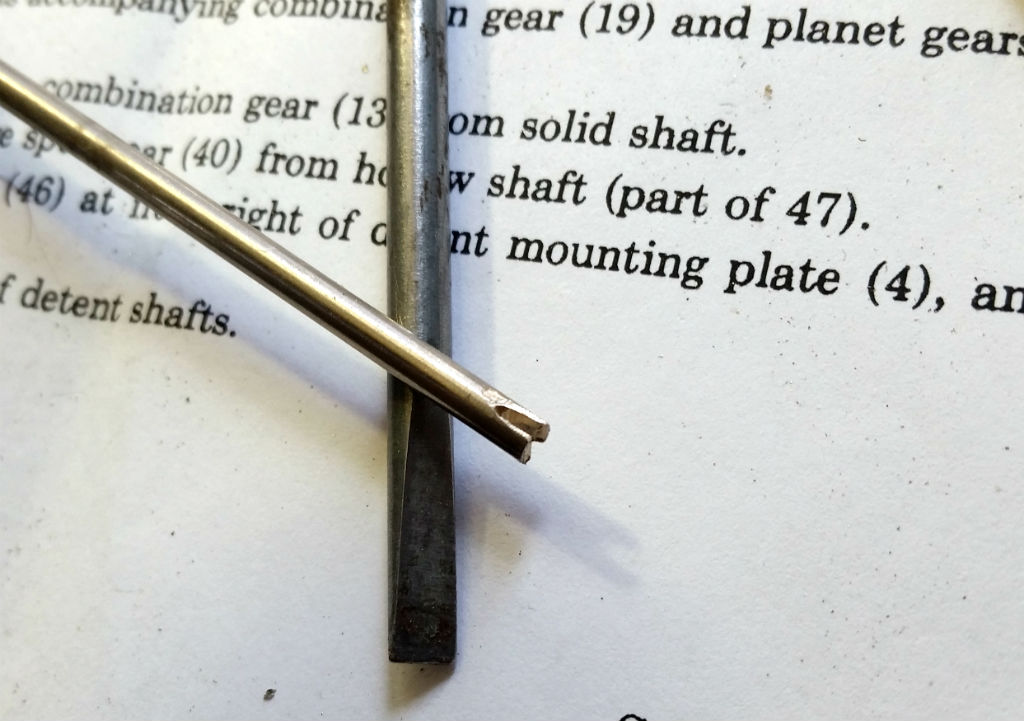 On a piece of 1/8″ metal rod that I had saved from an old Tektronix scope that I had salvaged, I cut a matching insert that I hoped would give the epoxy something to bite on to. 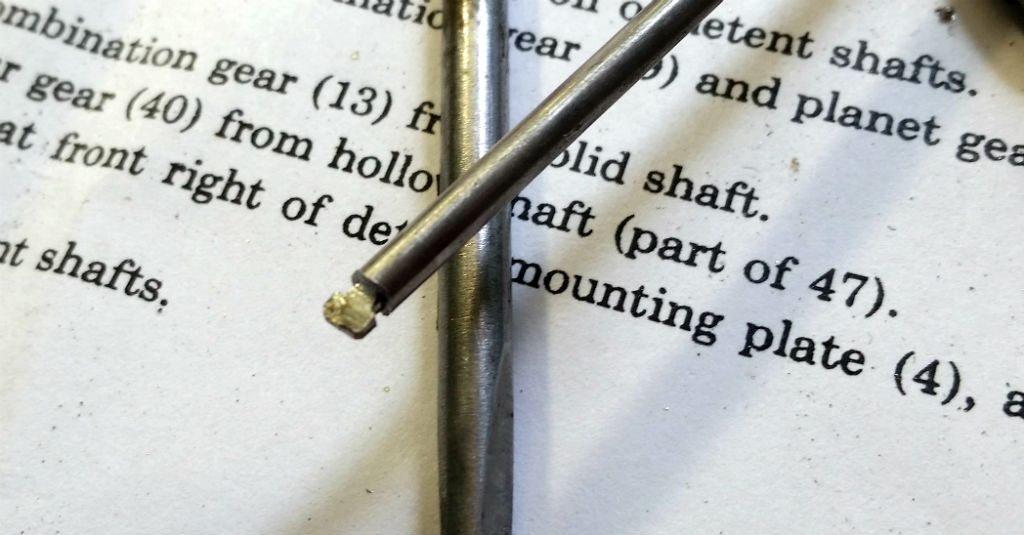 Epoxy was applied to the two pieces, and they were joined and held together in the slot of my vice.

Letting the epoxy dry overnight, I then sanded down the excess epoxy from the shaft, leaving it smooth enough and small enough in diameter to fit through the hollow shaft that it passes through in the bushing of the FM Deviation and Range module. It all went together as planned, and seemed to be sturdy enough. 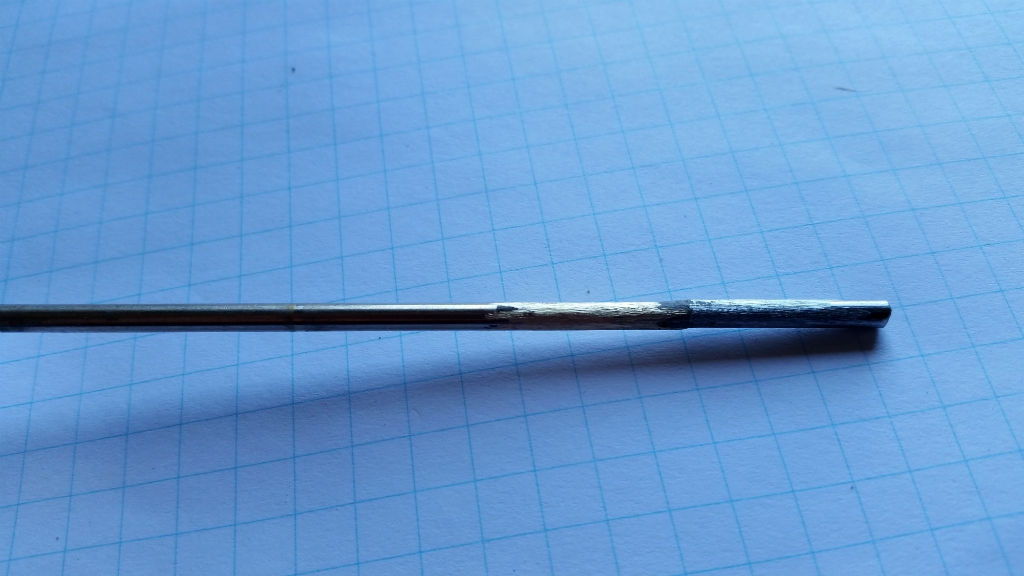 The module was reinstalled into the 8640b, and the knobs were reinstalled on the front of the unit. Again, I found an extra knob to fit the FM Deviation pot from the same old Tektronix scope. The knob worked well, and I thought I was ok with the repair.

Later in working on the 8640b, I needed to remove the module again, and when I put the knob back on at the end of the day, I got the setscrew across the repair, and ended up breaking the joint in the same location as it had been before. So that repair was not robust enough.

The next idea was to lengthen the shaft, but connect the new shaft at the end near the body of the pot. There should not be as much stress at that location, and there is more room to bolster the connection mechanically there.

I thought that I could use a coupler with two setscrews on it, but there was not enough room to correctly position the pot with the coupler installed. So I found a #8 nut from my parts bin, and figured I could use that as a sort of shell to hold a larger glob of epoxy to connect the two shafts together. I cut off the original shaft about a eigth-inch in front of the pot body. About enough to go halfway through the nut. I then set the nut up in my vice, and attached the pot shaft to the nut with epoxy again, putting the epoxy inside the nut, and around the shaft where it entered the nut. I was careful to not get epoxy between the shaft and the pot body, as that would have locked the rotating shaft into one position.

After drying overnight, I was looking for another 1/8″ metal shaft for the extension. I didn’t have any more that were steel, but I found a length of 1/8″ brass rod that should work well. It may even be better than the steel, as it is more malleable. I cut the brass shaft to a length that it would stick out of the front of the module about 1/2″ (enough to attach the knob at the end). Then I set up an extra nut in the vice to hold the shaft in place while I epoxied it into place again. 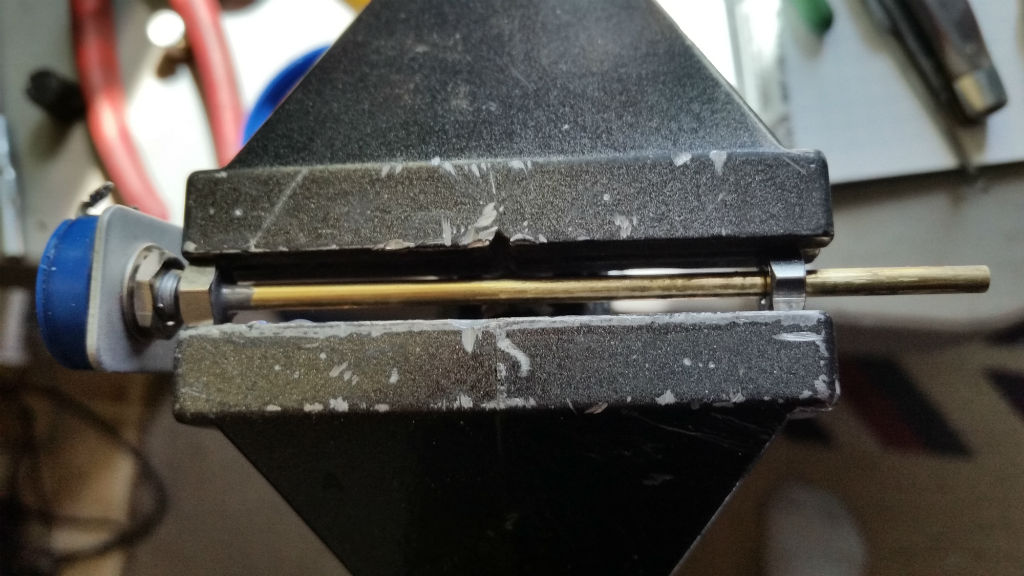 Once everything dried overnight again, I reinstalled the potentiometer back into the module. After a few twists of the knob, I found that the shaft was not connected at an angle close enough to being perpendicular with the pot. it felt wobbly, sticking in spots. I took it apart again, and thought I might just bend the shaft a bit to tweak it into position. It easily broke off of the nut.

At this point, I began to realize that perhaps my JB-Weld was old, and not hard enough (it felt kind of rubbery, even after drying more than 24 hours), or did not have enough surface area to hold well. I decided that maybe soldering the connection might be better.

So I wriggled the nut slightly back and forth at various angles until it fell off of the little shaft sticking out of the pot’s body. After cleaning things up with my knife to scrape off all of the epoxy, and alcohol to get any oily residue off, I cut a slot into the pot shaft and the brass rod, much like I had done above for the steel shaft. But this time the slot and blade were near the pot body end.

I applied a little flux to the joint and pre-tinned both parts with solder, being careful again to control how much I applied to prevent it from running down into the bushing of the pot. Then I held the two pieces close together with some nuts as heatsinks between my fingers and the brass rod. After tweaking it a few times, reheating with the soldering iron each time, I got it close to perpendicular. Then I took a nut, and applied flux to its threads and one face. I slipped this down over the joint, with the fluxed side facing up away from the pot. Again, using my heat gun, I heated up the nut and the brass rod to flow the connection together. I again tweaked it a few times to get it close to perpendicular. 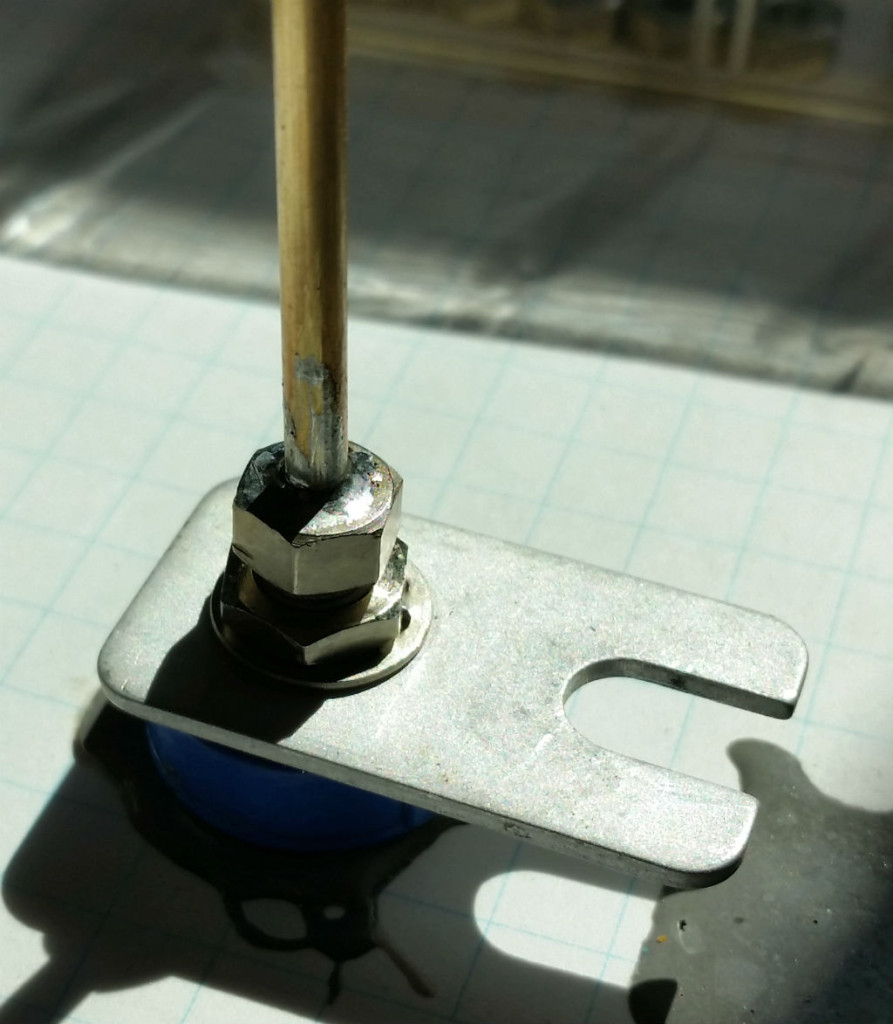 Once I was satisfied with the action, I reinstalled the pot back onto the A9 module. With the nut between the module and the pot assembly, there was still enough room for the forks of the mounting bracket to engage as they should, and the whole unit worked to turn the pot smoothly through its range. Success! 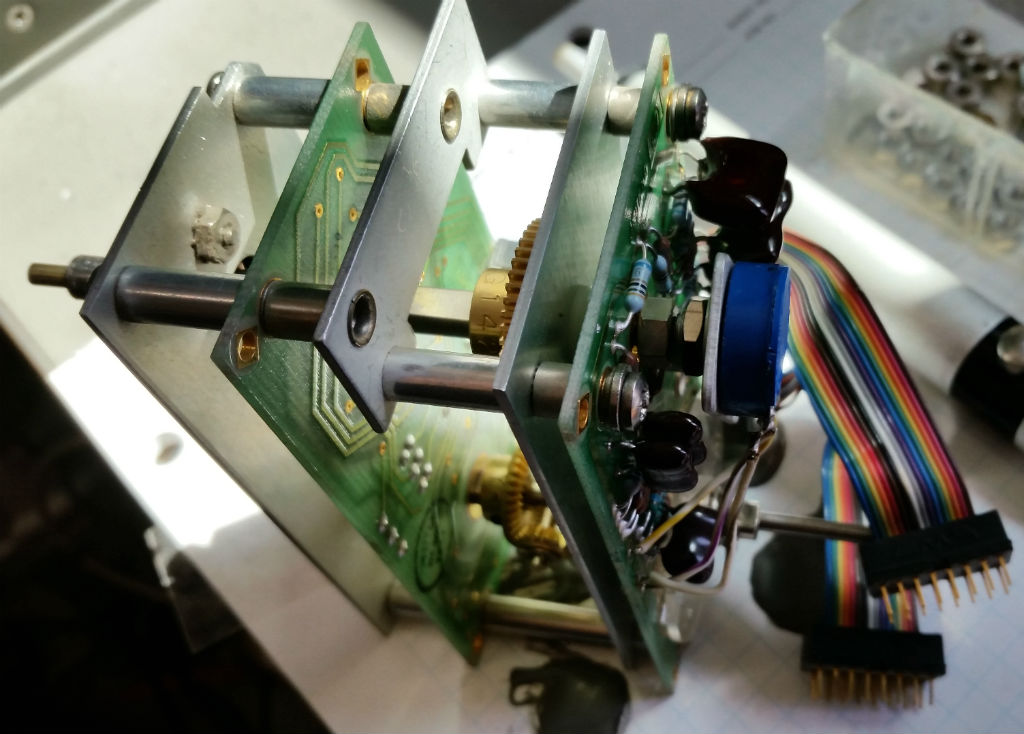 Nut between pot and A9 module 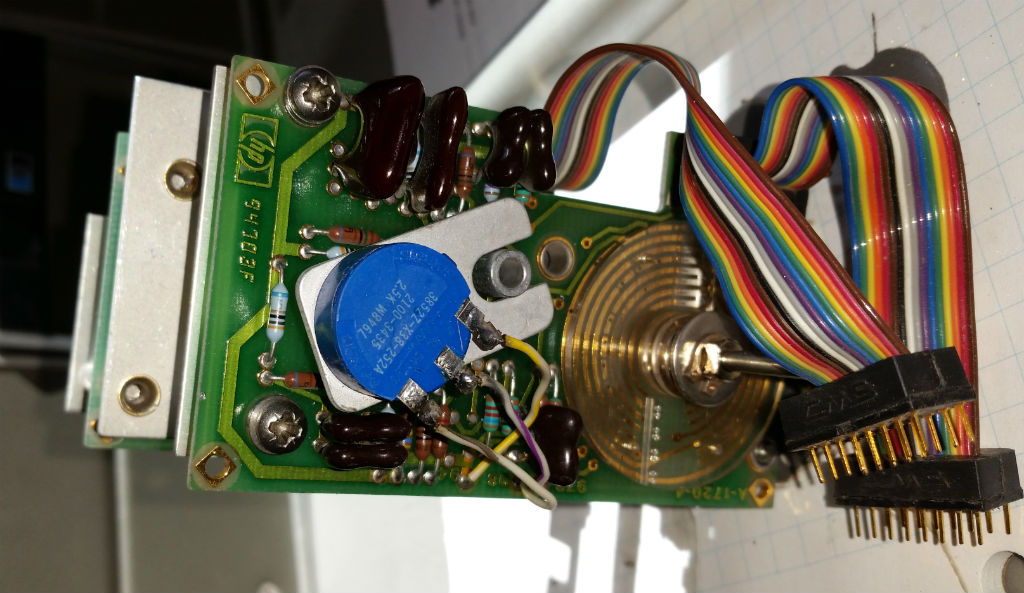