As mentioned in my prior post, I found that the elevation rotator for my Kenpro-5400 set had corroded internally to the point where it was no longer working. It had been sitting outside in the weather for over 10 years, with no maintenance or activity, and the seals had allowed water to leak into the rotator, resulting in the corrosion. The Azimuth rotator just needed a bit of fresh grease on the bearings to work smoothly. This post will show some pictures of the cleaning/rebuilding process for the elevation rotator. 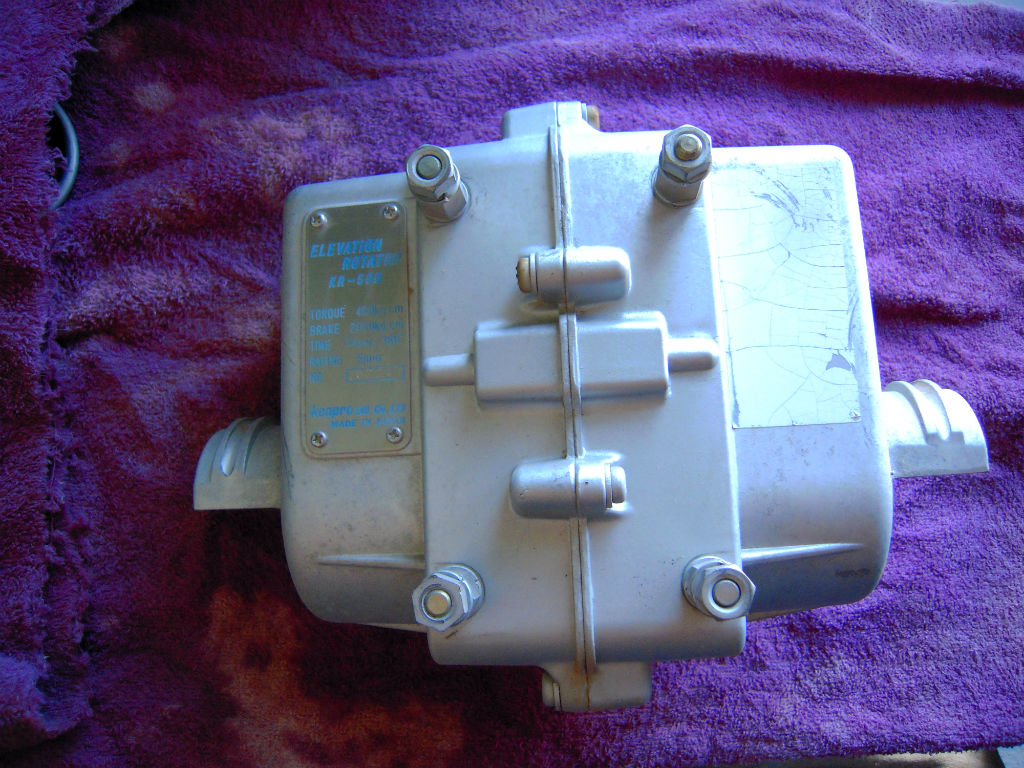 Upon opening up the rotator, this is what I found. Notice all the sand-like deposits scattered throughout the assembly. 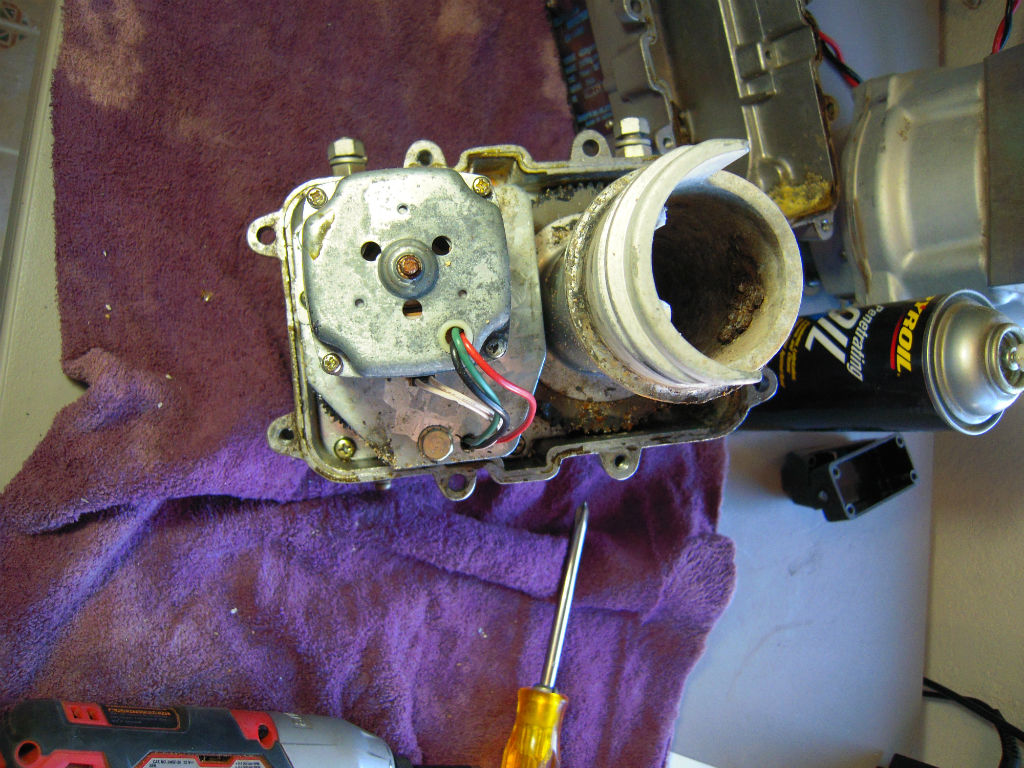 The motor and gear assembly is on the left, and the rotator axle is on the right. Here is a picture with more detail of some of the corrosion. 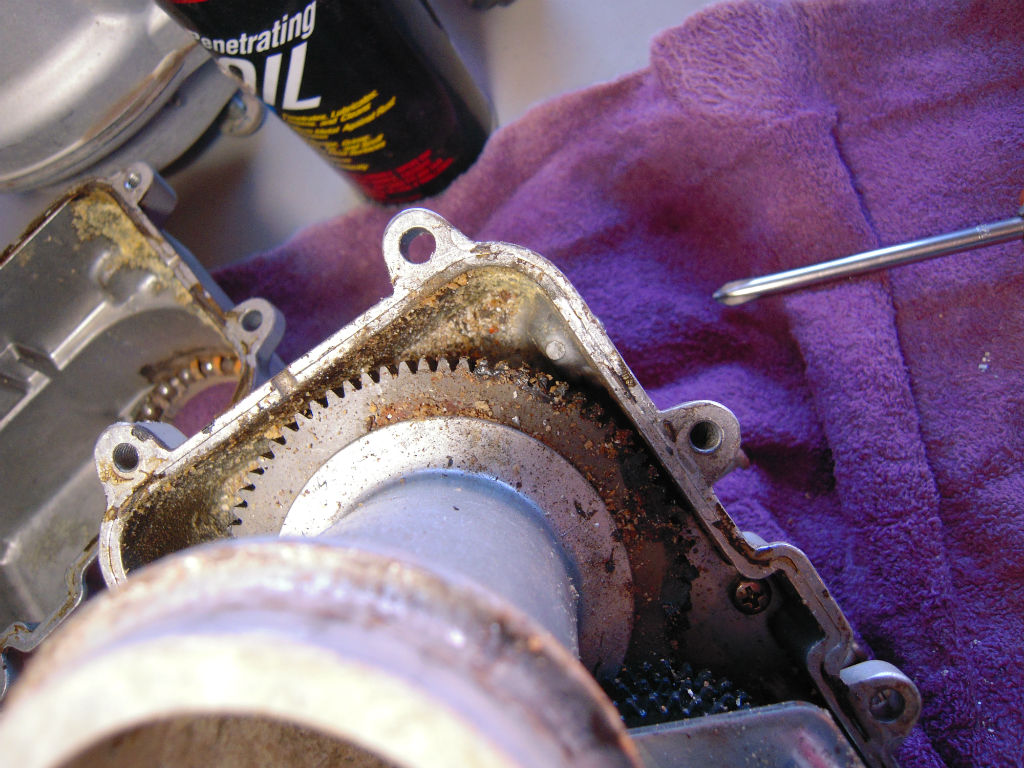 Corrosion around the axle

Next, the drive motor was unscrewed and moved out of the way. Under that is a plate that holds the drive gears in place. This was removed by taking off the bolts holding it in place. The plate holds two shafts that the gears slide over. Once the plate is lifted off, the gears will slide off of the shafts. Be sure to take plenty of pictures to get the gears back in the right positions when finished! I laid the gears on my table in the order I took them off. Here is a picture of the order they go back on, with the lower number being the first to go back on. 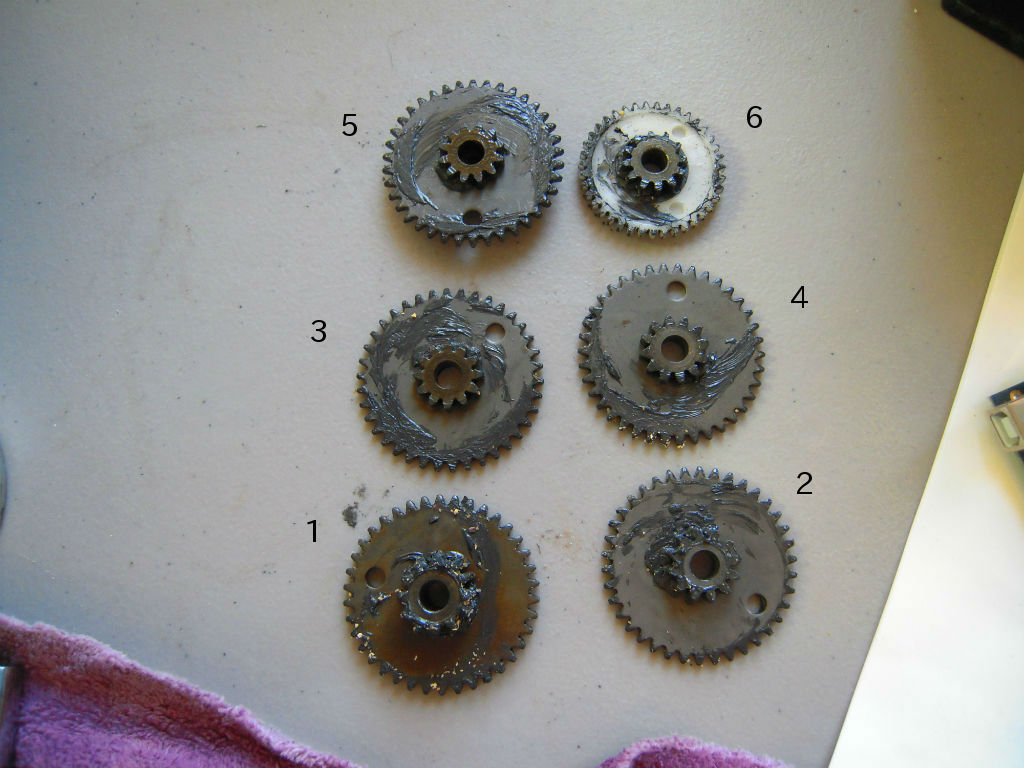 The gears go on with the small gear portion facing down. So I had to flip them over when I reinstalled them. 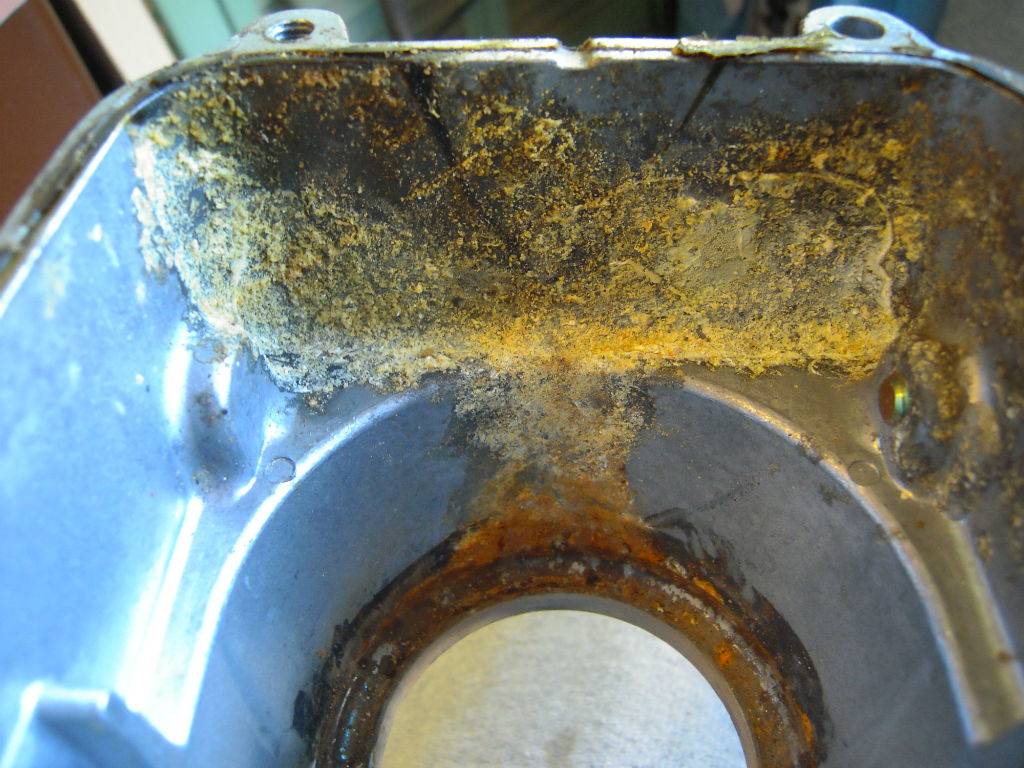 At this point, I took the assembly outside and began scrubbing it with soap and water and a stiff brass brush. That got most of the corrosion off, but I had to use sandpaper on some of it. For the toughest areas, I had to resort to boiling the housing in a vinegar water bath for 15 minutes or so. That helped a lot. 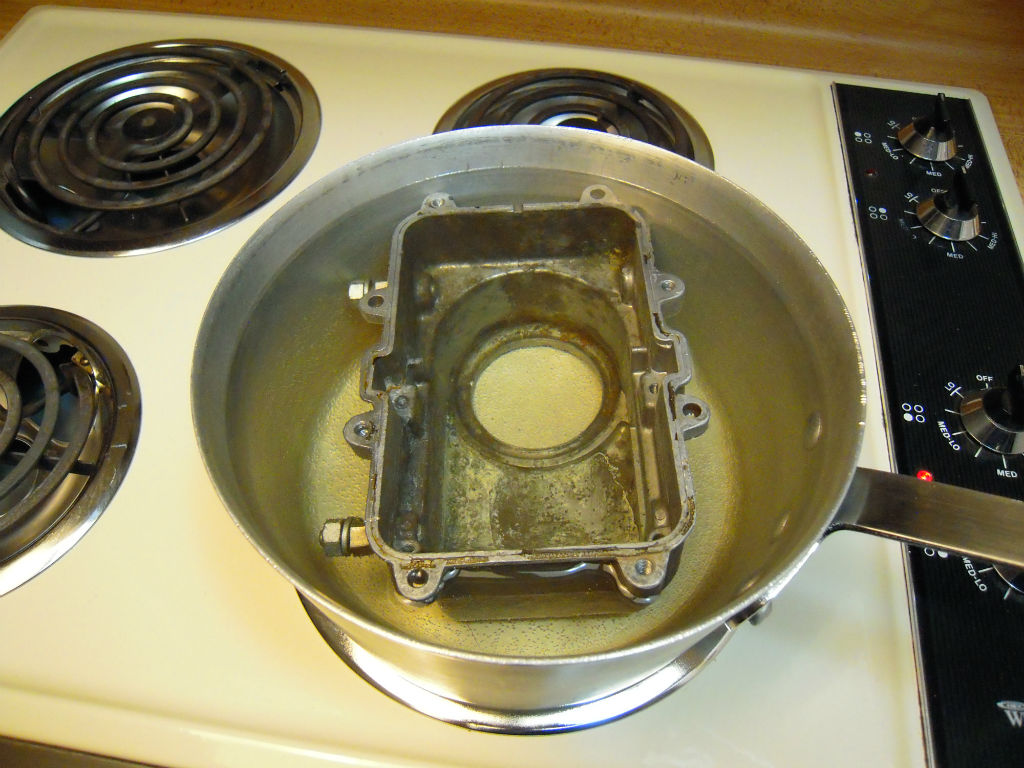 Once the bath was done, a little more scrubbing resulted in a usable assembly. 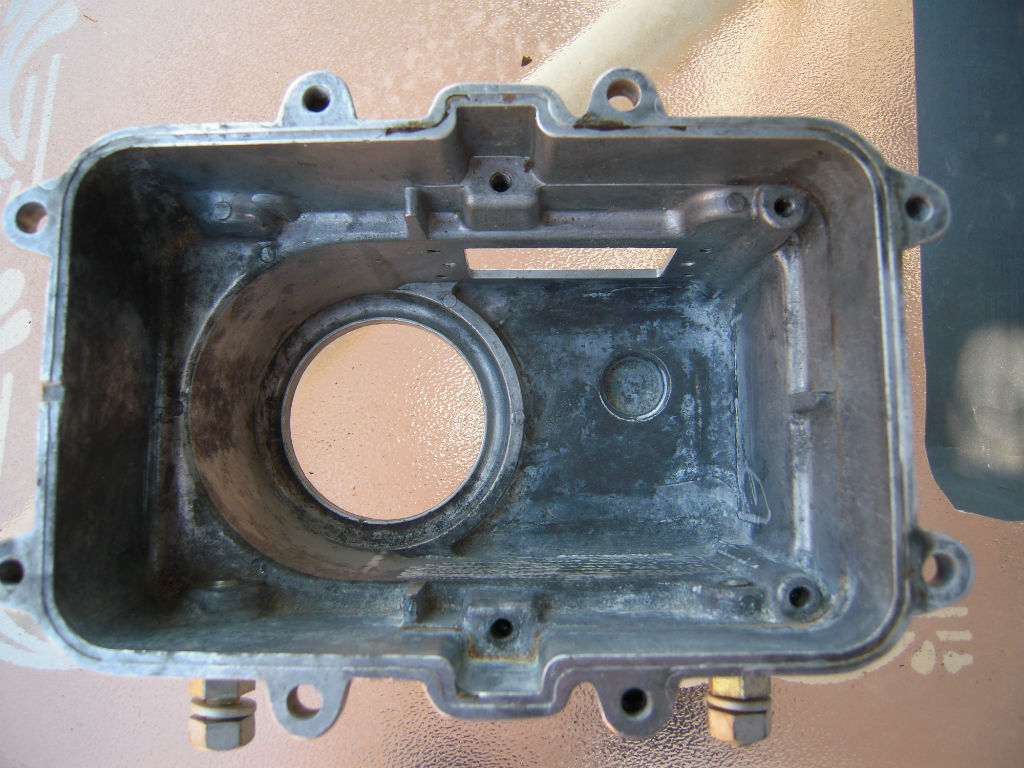 At this point, I had to purchase some ball bearings, as some of the originals had rusted to the point that they could not be cleaned. Luckily, our local Ace Hardware store had just the right size available. They go down then the circular groove shown on the picture above. I first coated them with grease, then set them in the groove. The axle was then set down on top of the bearings. After adding grease to the gears, they were reinstalled, and the gear plate with put back on. The drive motor was put back in place.

At this point, I needed to calibrate the rotator such that the stop engaged at the same time that the meter indicated that the rotator was at the end of travel. This involved loosening and moving the white plastic gear that drives the position potentiometer so that it reads correctly at both ends of the rotation. Then screwing down the gear plate and drive motor once again.

In the other half of the housing, I reinstalled the freshly greased ball bearings. At this point, I held the axle firmly in place and flipped the whole assembly over onto the second half of the housing, being sure to hold it securely so that the ball bearings did not fall out when I did so. Once the two halves were sandwiched back together, I was able to install the bolts that keep it all held together.

Hooking it up to the controller resulted in smooth movement throughout it’s range.