After having taken a break for a few years, I have renewed my membership in the Arizona Near Space Research group. This is a club that specializes in high-altitude balloon launches that carry payloads typically designed and built by students ranging from Jr. High to Post Graduate levels. I was involved in the club shortly after it was formed in the early 2000s, then found myself juggling for time to work on our cabin in Northern Arizona, Golf and family matters.

When I was involved years ago, I created an automated balloon tracking/antenna pointing system to keep our antennas pointed at the balloon as it floated downrange from the launch site. These antennas were high-gain 430 Mhz or 2 Ghz directional arrays on which we captured live video feeds from the balloons. My original incarnation was controlled by a PIC Microprocessor and a few I/O devices, driving my Kenpro KR-5400 Azitmuth-Elevation antenna rotator. It would listen to the GPS position info on the balloon’s radio link, and based on the ground station location, would calculate the correct azimuth and elevation to point the antenna at the balloon. It then sent appropriate signals to the antenna control box to steer the array. 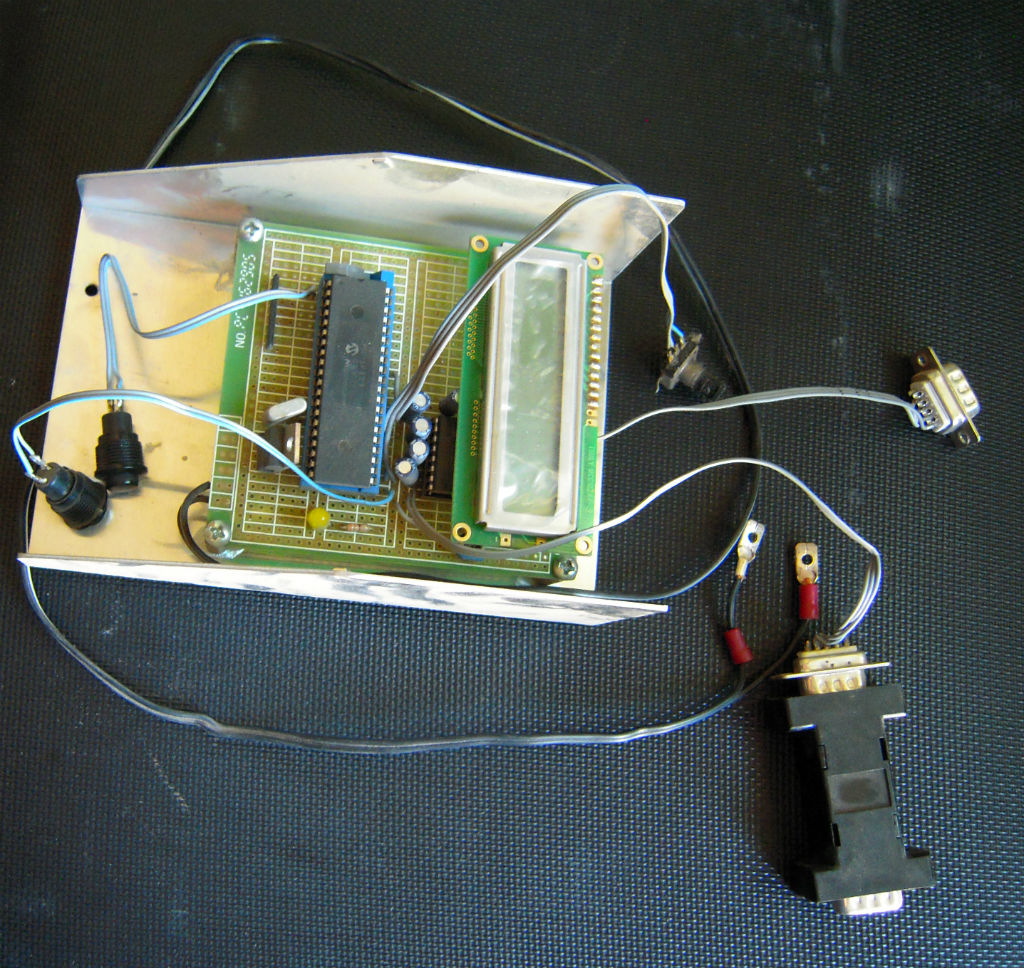 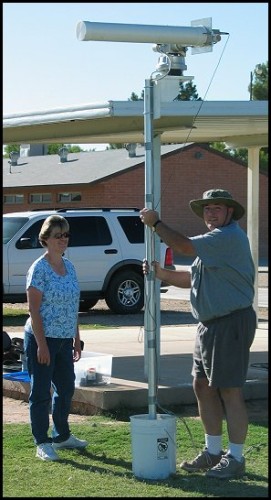 2003 – Tara and Randy (WB0SMX) with their Balloon Tracking Antenna array
After I left the club, Gary, K7GGG took over that responsibility. It’s his turn to take a break, and he recently contacted me to ask that I take over those duties. Gary has continued development of the ground station control system, and created a C# based program that runs on a laptop to provide that functionality.

As the format of the message has changed since I made my design over 10 years ago, I think it will be easier to utilize Gary’s program and interface it to my existing rotator, rather than resurrect the old PIC-based system that I had been using before. In order to accomplish that, I needed some new gadgets:

I can use my old Kenwood TR-7800 to receive the telemetry on 2-meters for one option. The second option is to use my RTL-SDR dongle to accomplish the same thing. 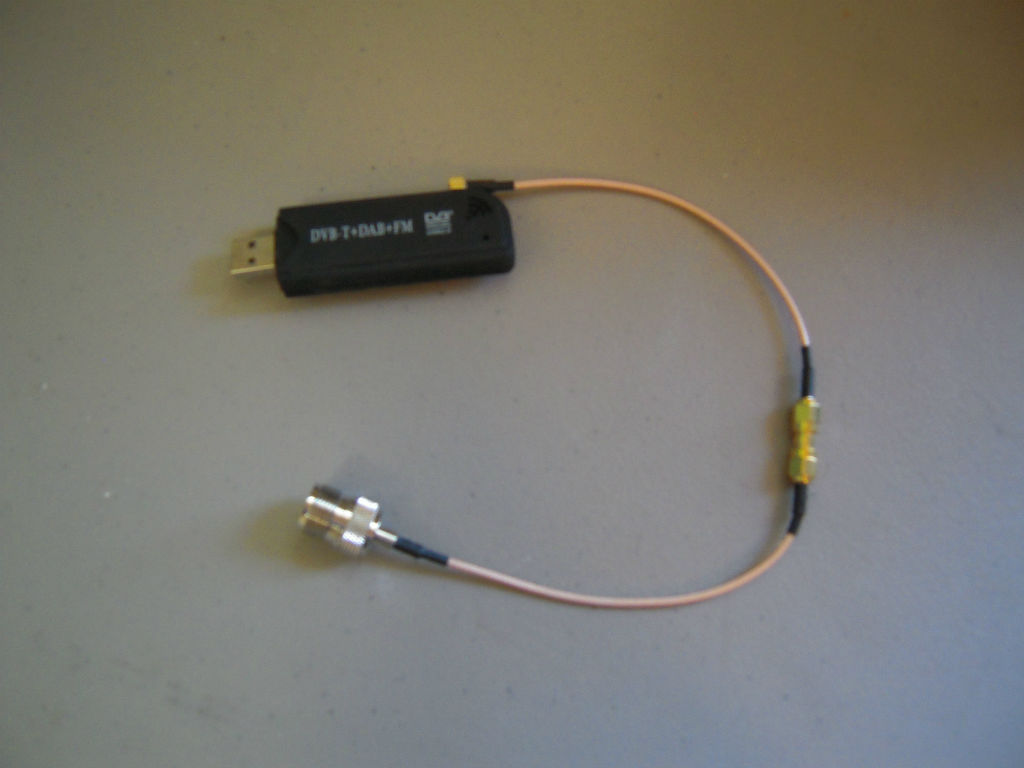 I was able to test the RTL-SDR on a launch earlier this month, and the receiver worked well. I was feeding it into the AGWPE software TNC for demodulation. This was then sent to a program called APRSIS-32, which displays the position of the balloon on a map. AGWPE also allows multiple feeds into other pieces of software to handle other functions. Unfortunately, Gary’s program does not have an interface to AGWPE (yet…)

So taking a step back, I needed to feed the telemetry audio into a KISS TNC to provide a serial output stream of the data, which Gary’s program can decode. My old MFJ-1270 TNC-2 box handles that nicely. Gary provided a sound recording of the launch earlier this month, and I used that to test his software on my laptop. I was now able to decode the telemetry, and Gary’s program was calculating the correct Azimuth and Elevation to point the array.

In preparation for the next step, I dug out my old 2-axis rotator that has been sitting in my back yard for over 10 years. I hooked up the rotators to the controller and found that while they did move, operation was very sluggish and made horrible noises on the elevation rotator. I ended up disassembling the elevation rotator and finding a bunch of corrosion and crud inside that was binding things up. I cleaned it up, greased and and reassembled. Now it works well. The Azimuth rotator was in much better shape, and only needed some fresh grease on the bearings and drive gear to restore it to good operation. 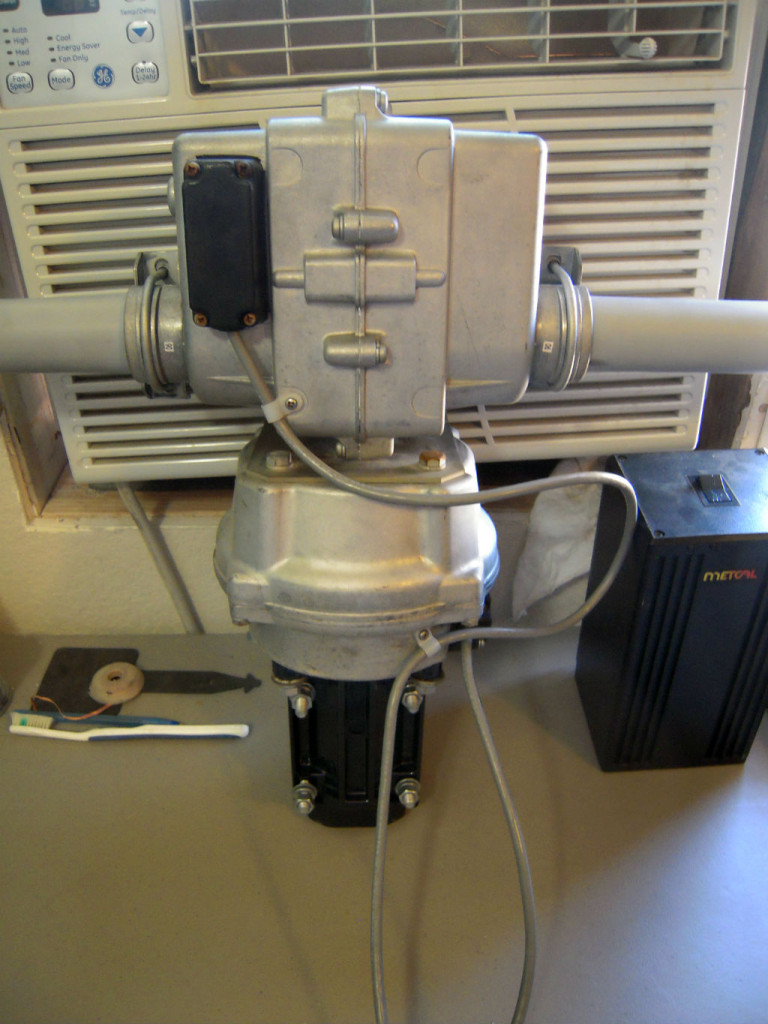 The next step was to interface from Gary’s program to my Kenpro rotator controller. For that, I obtained a device from ERC, the “Easy Rotator Control” company in Germany. The device I purchased is the ERC-M, which provides for two-axis control for a variety of rotators, including the Kenpro KR-5400. Once this was built and installed, I was bale to calibrate it and again use the test audio data to check that the system worked end-to-end. All went well with that.

So now, I need to assemble these items (and a few more) into a package that is easy to transport to the remote sites, and easy to set up. It must all work off 12 volts, so I must include an inverter in the package. I already had a camping generator so didn’t need to worry about that. I have an old 300 watt pure sine wave inverter from Circuit Specialist that has been hanging around the cabin for a long time.

Finally, I must devise a portable mount for the antenna array and rotators. My old system used a pole stuck into a 5-gallon bucket of cement. That worked, but wasn’t very easily moved around. My idea for this iteration is to use a folding step ladder and attachable legs to broaden the base. All will be held down by sandbags, if necessary.

More to come on this project in future posts…