In Part 1, we went over the design of the 24 volt charger. In this Part 2, we will describe the physical build.

At this point, I developed a PC board to hold all of the components in a solid manner. 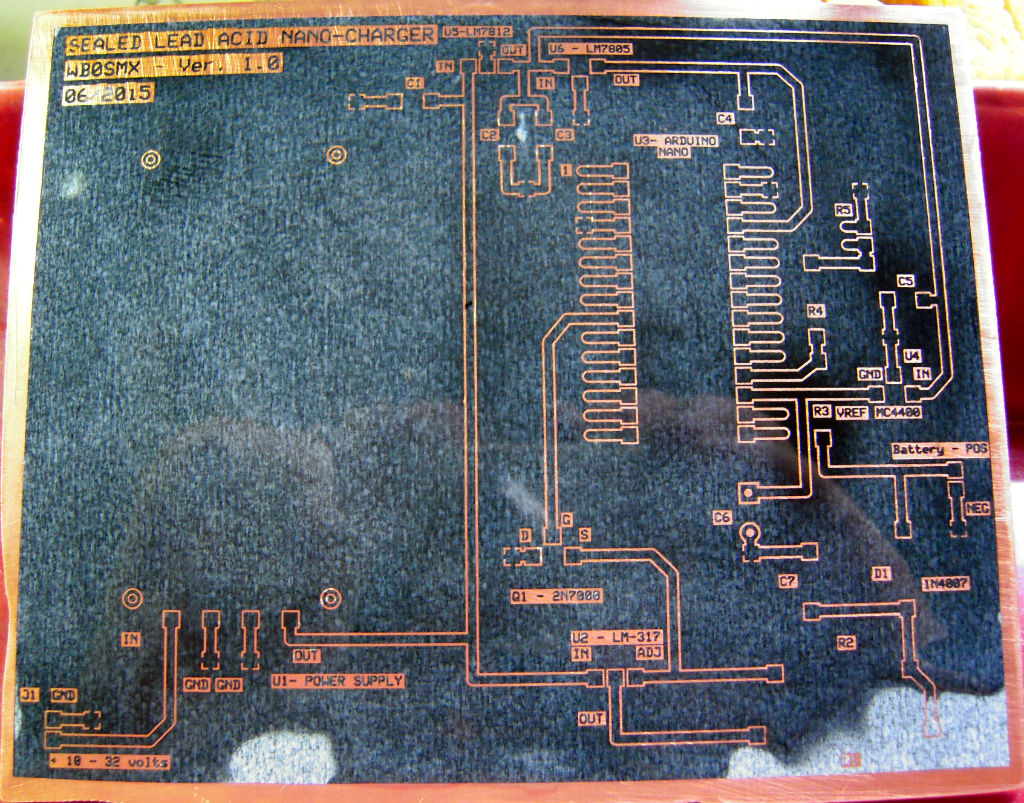 Once the board was etched, I marked the holes to mount the Geetech 150 watt boost inverter, shown on the right, below. I followed this with population of the discrete electronic parts on the board. The LM-317, with the big heat sink, is at the top of the picture. The blocking diode that prevents the battery from backfeeding into the circuit is on the left top. The Arduino Nano is mounted on a socket near the middle of the board. Â I made the socket from a couple of 24-pin sockets. One is mounted as a whole unit, and a second, with only 3 pins on each side, is mounted directly below the first, to add up to the 30 pins total needed to accommodate the Nano.

The dropping resistors for the voltage sense circuit is to the left of the Arduino. And finally, the linear voltage regulators are on the bottom of the board (I used a 12 volt regulator to drop down from the 32 volts supplied by the boost inverter, then a 5-volt regulator to further reduce the voltage to Arduino compatible levels). 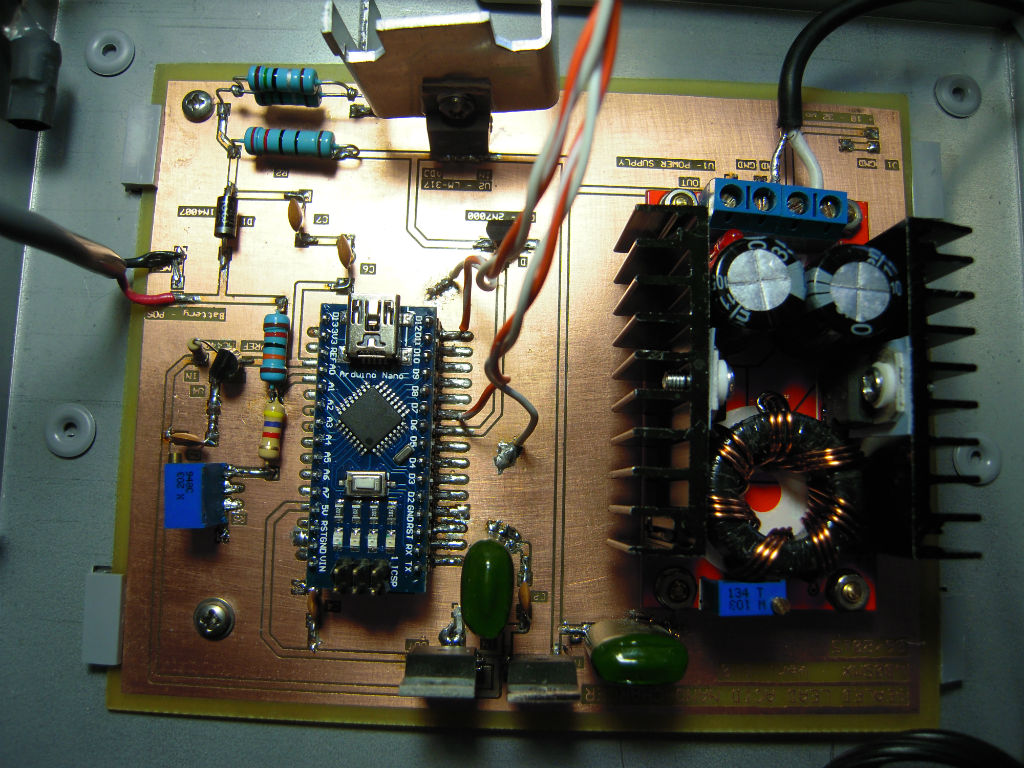 Once the board was populated and tested, I mounted it in an old Sun SCSI Disk cabinet that I had laying around. The Power to the boost inverter is supplied by the 19-volt brick power supply that was originally for a laptop. It is a 60-watt unit, and is sufficient for our purpose here.

The white and Orange wires are to connect the LED indicators on the front of the cabinet to output leads on the Arduino. The grey lead is to connect to the Anderson Powerpole connectors that feed the battery being charged. 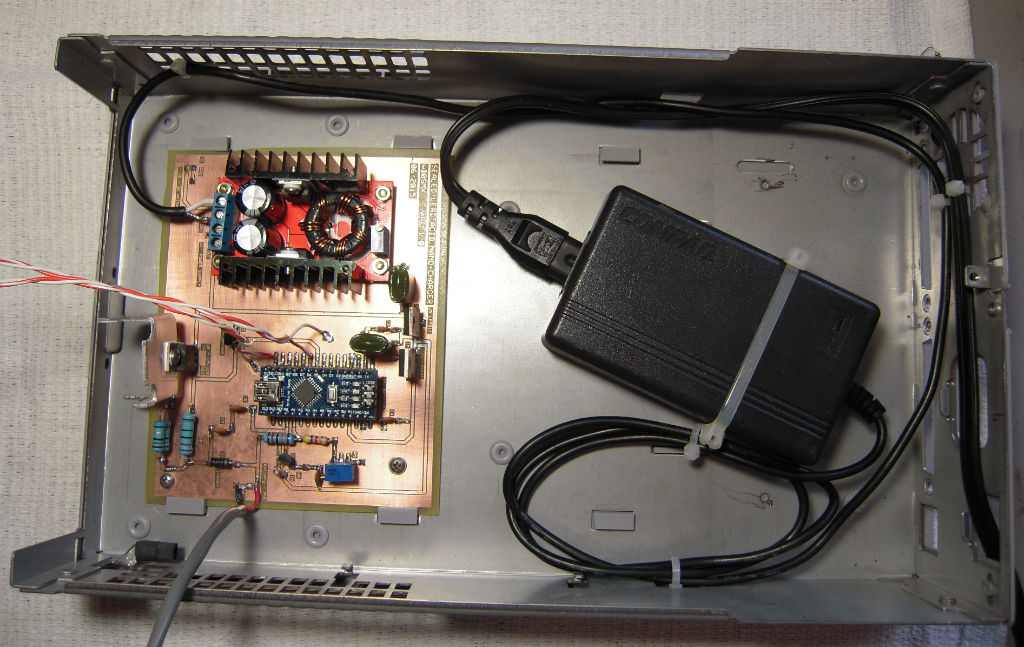 A couple of LEDs were added with 270 ohm current limiting resistors. These indicate Charging (Red) and Resting (Yellow). I used JB-Weld to hold the LEDs and Powerpole connectors in the openings of the disk cabinet. 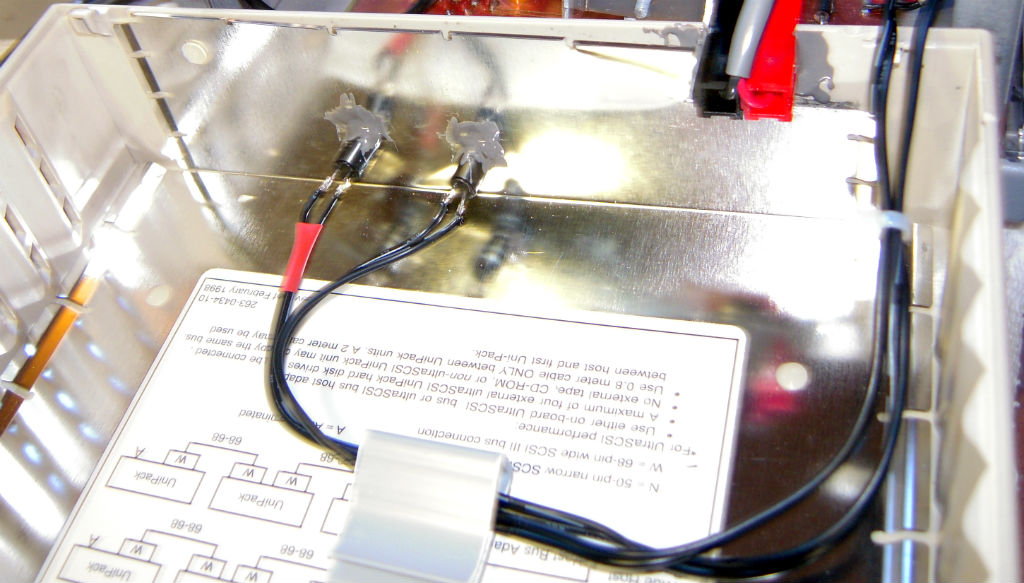 Here is a link to version 1.2 of the PCB artwork.

I don’t remember exactly why I changed it, as that was 2 years ago. But I believe it was a matter of making parts fit just a little better.