Recently, the battery charger inside my battery powered lawn mower died (again). This time, I found that the printed circuit board was so rotted by moisture, that it was unrepairable. Knowing that the rest of the mower is still in great shape, and given that this OEM charging circuit had failed several times in the past, I set about designing a new external charger for the mower. 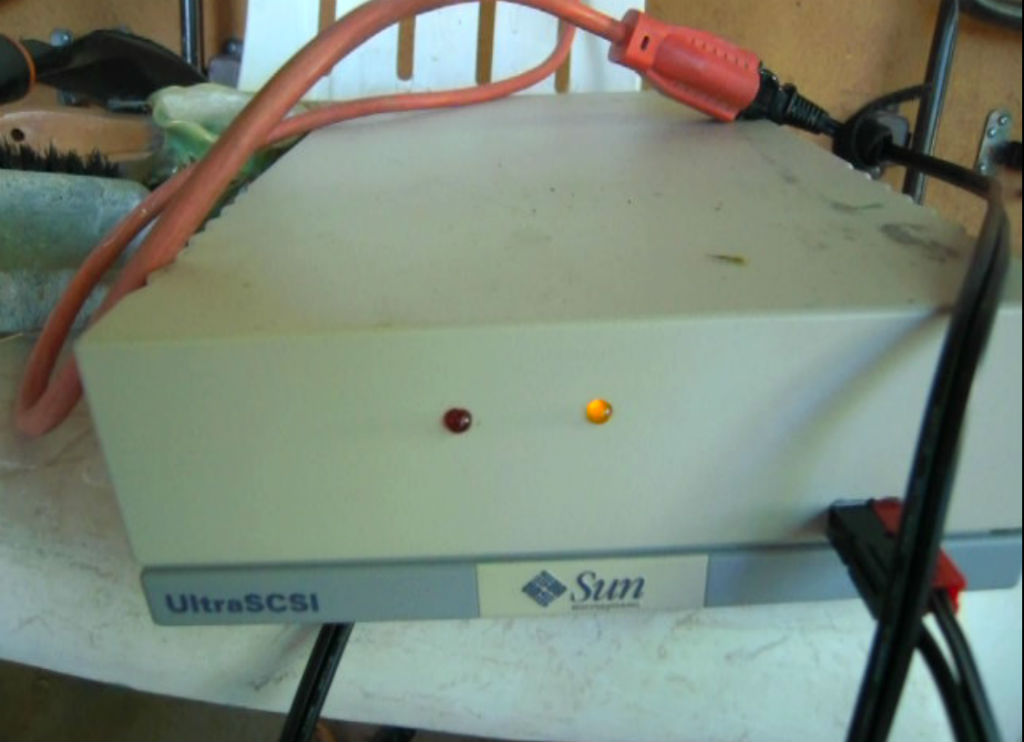 The mower used a 24-volt Sealed Lead Acid battery for power (about 18 Amp Hours). I was unable to find a new battery locally that would fit, so I made a battery pack of two 12-volt 18-amp SLA batteries in series. I had done this previously, and it worked well for several years (until the charging circuit failed!) 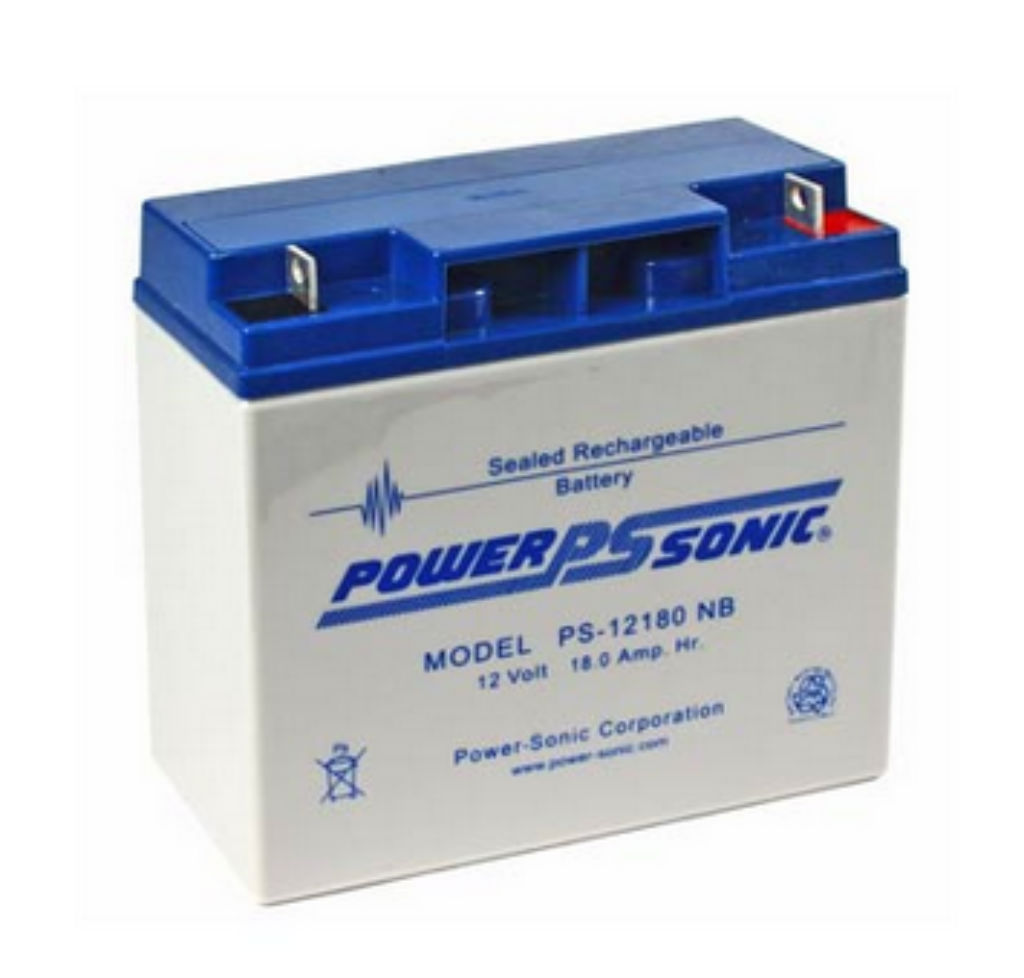 So this charger would require about 26 – 32 volts output, be current limited, and voltage regulated. 24 volt transformers are getting expensive, so I wanted to find a cheap alternative. I had several old laptop chargers around that were good for 60 watts at 19 volts. Maybe I could use them somehow.

In researching solutions, I came across an article (An Automatic Sealed-Lead-Acid Battery Charger) in the May, 2001 QST Magazine by Bob Lewis, AA4PB. In the article, he described a 12-volt SLA Battery charger that had the features I was looking for:

Stay connected to the battery continuously without under or over charging
Setpoints for top and bottom of the charging range.
Higher current (1.6 Amps) initial charge rate, while protecting from overcharging.

The trick was to customize his idea into something that would fit my needs.

Bob’s design used an LM-317 regulator by configuring it as a current limited pass device. He had Op-Amps to sample the battery voltage, and turned the LM-317 “ON” when voltage fell below the low setpoint. It would remain on until the voltage reached the upper setpoint, at which time the circuit would turn “OFF” the LM-317. It would then wait until the voltage dropped below the lower setpoint before turning on again. In this way, the battery would slowly cycle between 13.8 and 14.5 volts, keeping the battery at a high state of charge without overheating it.

In looking at the circuit, I thought that there were some inexpensive modifications that I could make to simplify the electrical circuit, and use some modern components.

The first, and most necessary modification was to make the system work for a 24-volt battery. For a source voltage, I used a 19-volt laptop power supply brick to start. These are a dime a dozen through Amazon, Ebay or your local thrift store. I had several sitting around. I had to boost this 19 volts to somewhere around 30 volts. To do this, I searched Amazon.com and found a cheap 150 watt boost converter from China that would take 10 – 32 volts and convert it to anywhere from 12 to 35 volts. The model I got was a Geetech, and cost $3.72. I bought 4 of them at that price.

Now having a cheap 32-volt power supply available, it was only necessary to change the current limit resistor to fit my needs. I decided that a 1.5 amp charge rate would do just fine. To calculate the current limiter resistance, the formula is:

Then I just had to change the voltage divider network to convert the 0 – 30 volt range to 0 – 5 volts. I used a 120k resistor, with a 4.7k resistor and a variable 0 – 20k potentiometer to make the voltage divider. This means that with 32 volts applied to the top of the divider, I could adjust the pick off voltage anywhere from 1.2 volts to 5.4 volts. This would give me plenty of range for adjustment of the pot to represent the true input value.

At this point the circuit had all of the basic components for the charging current.

Next, I decided to use an Aurduino Nano microprocessor controller, rather than the Op-amps in Bob’s design. This allowed me to easily tweak the design on the fly for easy development. It has analog sensors, and analog reference pin, and digital input and output available.

I used a 5-volt precision zener diode for the analog reference voltage connected to pin 18 of the Nano board. The voltage divider sense voltage was applied to the A0 input of the Nano on pin 19.

The 2n7000 FET to control the LM-317 regulator was attached to the D6 output pin 9, and the charge and rest LED indicators were connected to D7 and D12 on pins 10 and 15. The 5 volts and ground were attached to the appropriate pins on the Nano.

A couple of LM7812 and LM7805 regulators were used for general power supplies. The 7812 was used to help step down the 32 volts before applying the resultant 12 volts to the 7805 regulator. 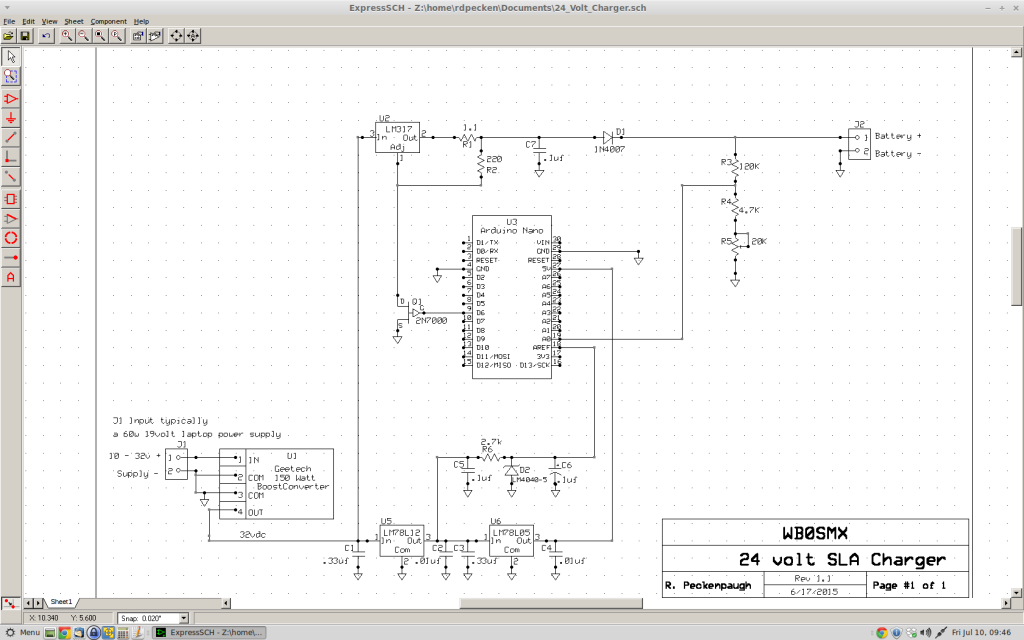 So all of this was built up on a breadboard for a first pass. After some tweaks, I arrived at the final design. 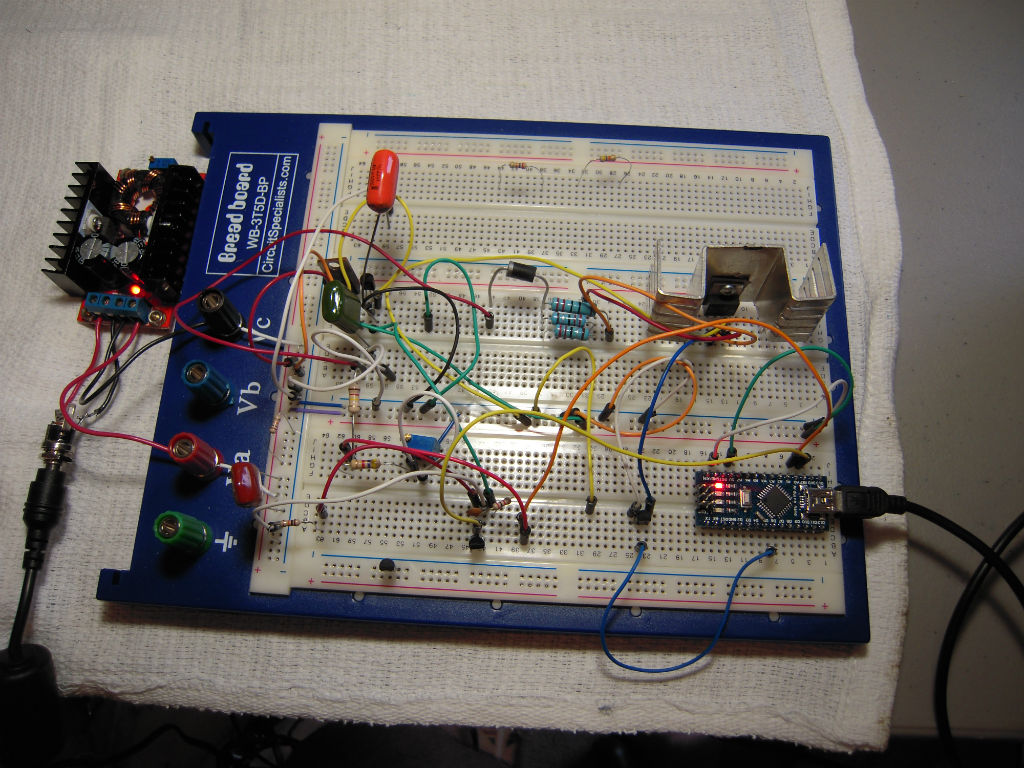