A couple of years ago, my (then) 28 year old Kenwood TS-430 started to have problems. The first symptom was that the display would count up in frequency, no matter which way I turned the tuning knob. This was intermittent  occurring mostly in the first few minutes after turning the rig on for the first time in the day. Eventually, it became worse, until it was a constant problem. At that point, I put the old 430 on a shelf and bought a new TS-480 as a primary rig.

So fast-forward to present day, and I decided to bring the 430 off the shelf and do some repairs.

I started off checking the various power supplies, and found the the 5-volt supply was sitting at around 3.5 volts. Suspecting the usual suspects, I changed out the two electrolytic capacitors tied to the 5-volt regulator. That fixed the immediate problem. 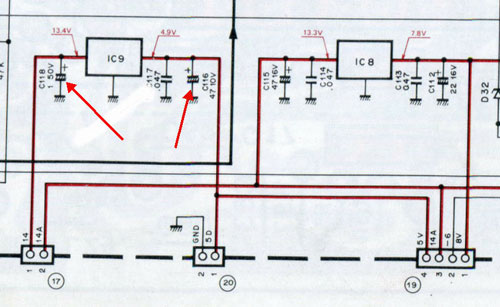 Note how nasty the leftover flux is from the manufacturer… 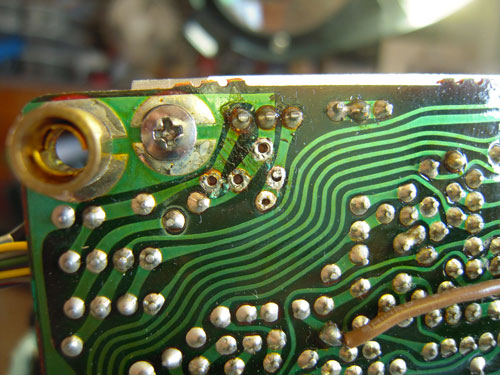 Replacement caps are a little bigger... 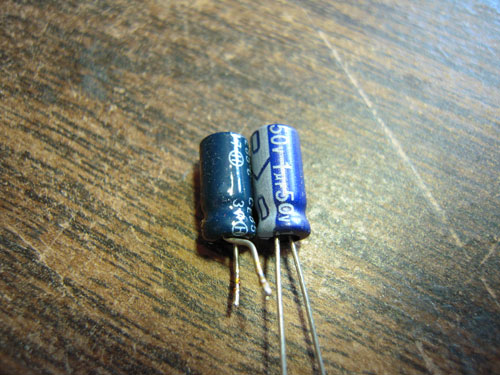 The new caps are a little bigger than the old ones

So after the TS-430 was operational for a while, it started developing a new problem. The audio level dropped drastically when the Notch Filter was OFF. That seemed strange, and was eventually traced to what I thought was a poor solder joint on the back of the Notch Filter Switch. I re-soldered the connections, and normal functionality was restored.

The problem was that the 8-volt switching voltage was not reaching the diode feeding the squelch transistor when the Notch switch was off. 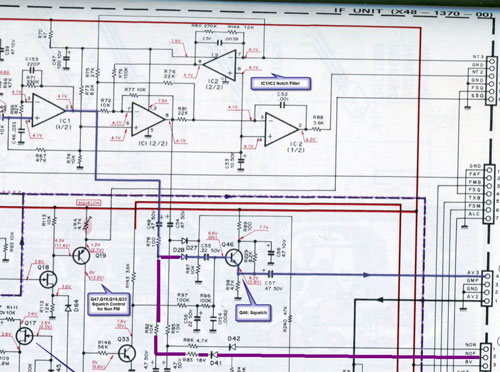 While I had things torn apart, I decided to clean the pots and switches with some DeOxit. I sprayed D-5 on the switches, and Fader Lube on the pots. This led to a problem in which the radio lost sensitivity in the Single-Sideband position. I traced this to a missing 8 volt switching voltage to the wide filter when in sideband. In CW, there was no problem. A few more spritzes of deoxit on the wide/narrow switch brought it back to normal.

The Wide/Narrow switch is actually a dpdt, so separate circuits for CW and SSB. That’s why CW still worked. 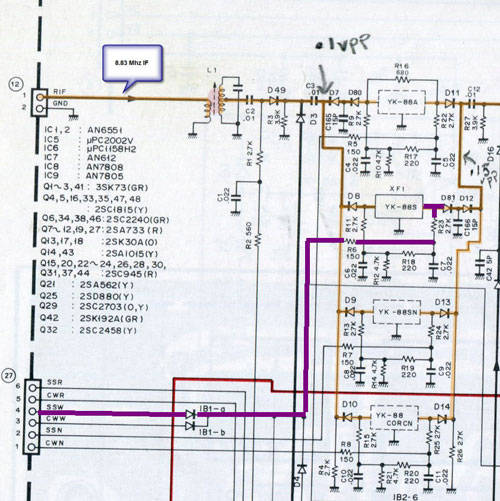 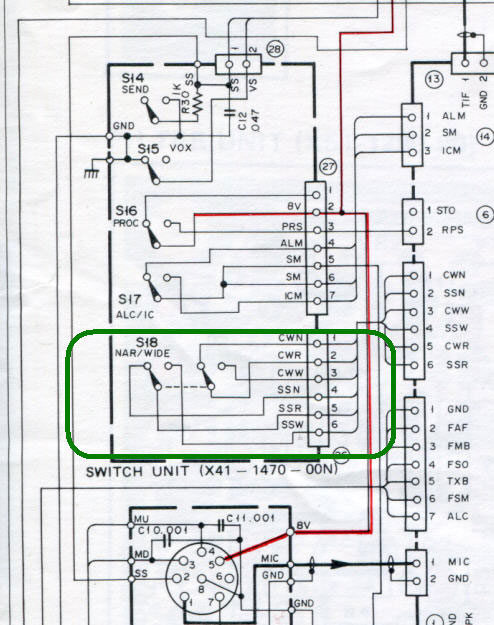 SSB/CW Wide/Narrow switching
Next, the notch filter problem recurred. This time I found the real culprit, a hairline crack in the trace near the Notch Filter switch. I added a solid wire to bridge the gap, and fixed it (for good, I hope!) 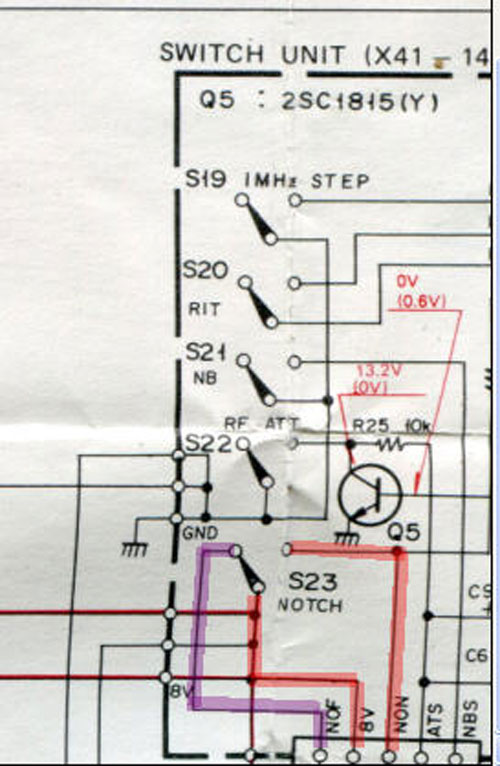 Violet Line is the missing NOF signal from the switch.

The next item tackled was the 30-year old backup battery. While it has never given me any problems, and still read 3.3 volts, I decided that I better replace it while I had everything open.

Instead of finding a coin cell with tabs welded on, I went to Radio Shack and got a CR-2032 coin cell, and a matching holder. This will make it easier to change 20 years from now, when it’s time to change it again.

I soldered leads onto the cell holder, and put the cell in it. Then I slipped some heat shrink over the entire thing to prevent shorts, and attached it to the original terminals. The cell just lays there, sandwiched between the layers of boards. 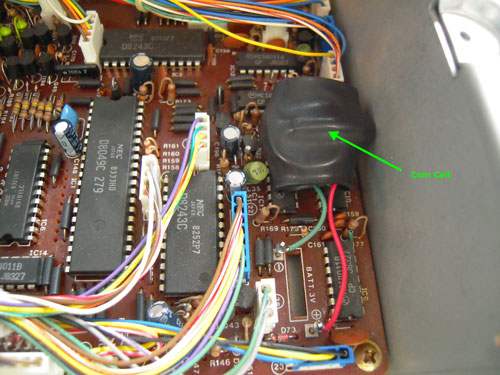 Finally, I needed to replace the wheat lamp for the meter. It had gone out before, and I had replaced it, but has since burned out again.

This time, I found a bright white LED, rated for 20ma. I used a 680 ohm resistor in series with the hot lead to drop the current down to 15 ma. The light is just right. I then glued it in place with my XYL’s hot glue gun. Works fine, last a long time… 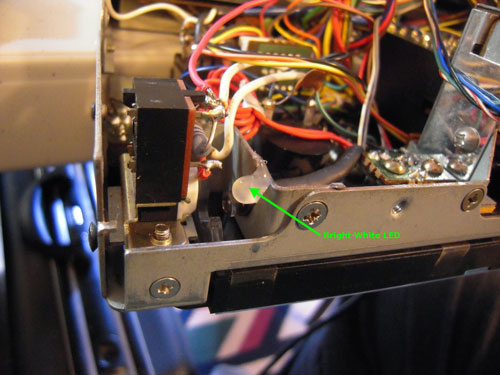 That’s about all I could find wrong with the rig to this point. It’s working really nice now, and should be a good alternate rig. 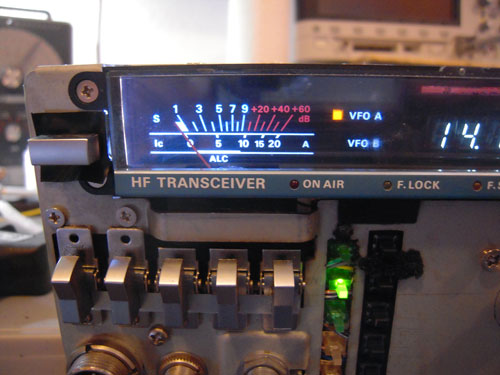