John, his son Dan and I met up at the Ranch in late December as they were passing through on the way to California.  When we arrived on Friday afternoon, it was apparent that the 135′ doublet antenna had broken away from the mast on the west end.  We had used some Blue and White rope from the insulator at the end of the antenna to the mast.  That rope lasted about 1-1/2 years in the elements of Northern Arizona.  We decided to fix it on Saturday.

First, we lowered the mast on the east end by pulling the pin at the bottom, and tilting it over.  While it was down, we used some clothes line that I had left over from another project to reconnect the antenna to the mast.  We also cut the guy ropes in the middle, where they had been sliding back & forth through an eyelet at the top of the mast.  To prevent fraying, we tied each guy rope separately to the mast eyelet. 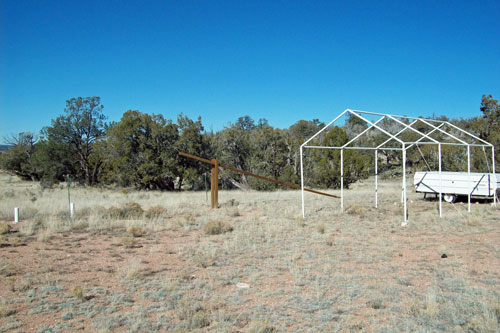 Next, we loosened the East end of the antenna from its mast. This allowed us to lower the middle mast in order to do some maintenance there, as well.  John worked on tightening some hardware for the eyelets. 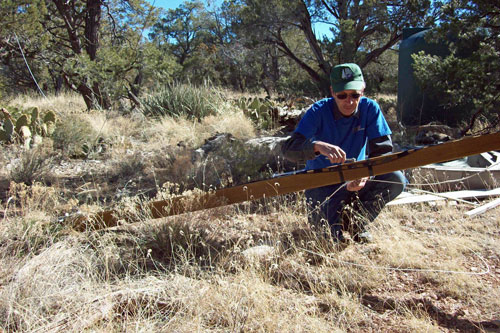 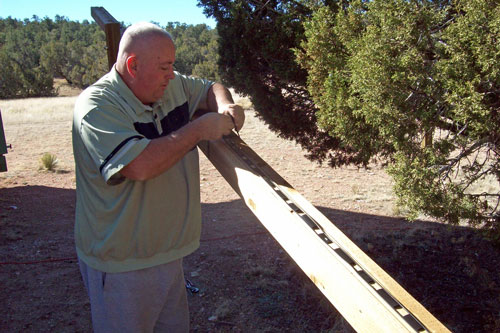 This antenna has worked great for a year and a half with the feedline right next to the wooden mast, so I’m not concerned about upsetting impedances or anything at this point.

We re-tied the guy ropes to the eyelets to prevent fraying, then we raised the center mast back to its upright position.  John is ready to put the pin in place when the mast is upright.  I’m pushing down on the pivot end to raise the other end.  It’s really easy.  Nice setup. 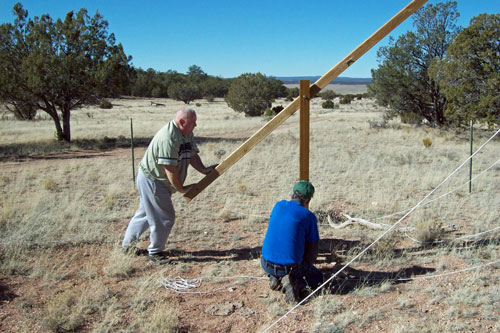 We pulled the antenna relatively tight from each end. 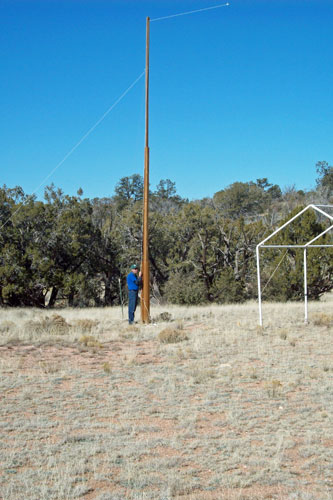 Once everything up top was secure, we worked on a quick disconnect for the feedline to the cabin.  Dan helped me by soldering the banana plugs to the feedline. It was fairly windy by this time, and it was hard to get the connectors hot enough.  We resorted to using a blowtorch. 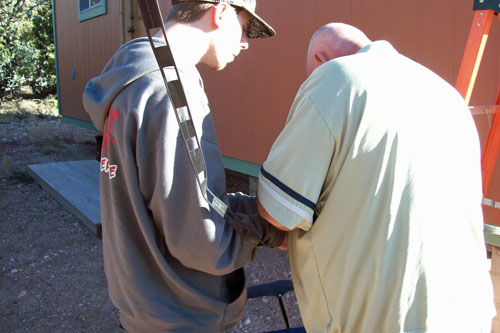 Dan and Randy soldering with the torch.

We ran a section of feedline from the back of the house, under the frame, and up into the house on the other side.  We put some terminal ends on the outside end, which allows us to connect it to some banana jacks.  Later this year, I’ll mount these in a weathertight box.  For now they are just loose.  Anyway, this allows us to quickly connect/disconnect the antenna from the house as we come and go, or as weather dictates. 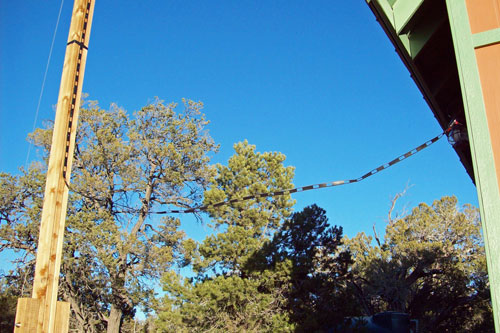 So it should be a nice clean install once I get the weatherproof box in place.

We tuned up on all bands.  With the shorter jumper to the feedline, the settings on the tuner changed, but it still loads up and works great.  20 meters changed the most, but I eventually found a good setting on the tuner for it.  After tuning up on 80 meters that night, we made contact with a gent in Ashville, NC on our first try.  He was running 800 watts, and we were running 100 watts.  We both had about the same signal report, with him being about 1 s-unit (6 db) higher.  But we were both easily heard on the other end and had a nice 10 minute chat.