We first tried using the Receiver Noise Bridge to check the antenna operation, but could not get reasonable nulls an any band.  That was our first sign of trouble.  After hooking up the radio and the bias-T connections, we found the operation of the vertical pretty dismal on all bands.  We hauled out a battery to energize the band switching arrangement as needed while troubleshooting. 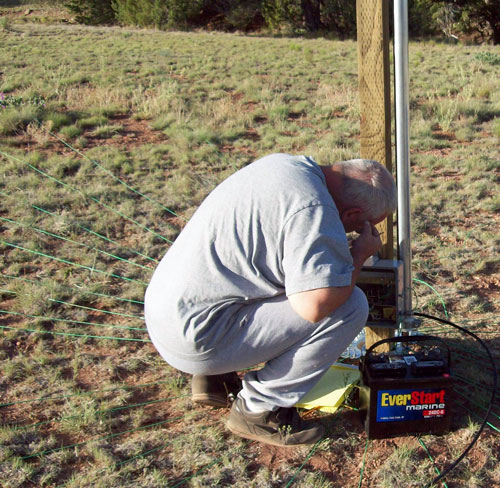 After fields day operations had started, we continued to debug the problem, while simultaneously doing some operating with the 135′ doublet (which worked great, as always!)

We found some wiring errors, and fixed them.  Our expectations were high, but again, the antenna just did not perform well. 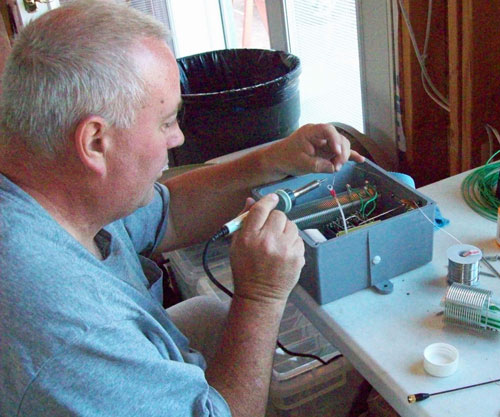 We decided to go back to basics and check with the simplest configuration.  We took the noise bridge out and measured the resonant frequency of the antenna with no matching network.  At 5.34 mhz, we found a null at 20 ohms resistive and 0 ohms reactive.  Plugging in the formula for a quarter wave antenna, we found:

Next, we removed the 4:1 Unun from the matching network and tested it to make certain the wires were connected in the correct manner to give us the required 4:1 stepdown ratio.  We connected a resistor between ground and output side of the Unun.  Again using the Noise Bridge, we were able to confirm that the impedance read at the input was 1/4 of the impedance at the output.  So we knew that the Unun was good, and connected correctly.

At this point, we double-checked the wiring through the relays of the matching network.  We believe they are all correct.  That left the Bias-T arrangement on either end to worry about.

We wired the Unun in line with the antenna at its base, and connected the radio up to the other end of the coax again, through the bias-T box at the radio end.  This configuration worked very well on all bands above 80 meters.  We got good matches, and very good performance with this arrangement (minus the two lower bands, of course).  So this confirmed that the Unun and Bias-T in the shack were working well.

That leaves us with the Bias-T network in the matching box as the likely culprit.  Since the same choke coil was used on both ends of the bias-T, the only real difference is the two 5-kv mica capacitors that I used in the matching network as blocking capacitors.  I suspect these are the problem.

For now, we left the Unun wired haphazardly in place, minus the rest of the low band matching network.  That is how we used the antenna through the rest of Field Day.

Somewhere along the line, we added the ground rods at the antenna base, and at the shack end.  We don’t know if the helped with the antenna operation, but they did help with the RF feedback that we experienced last year on 40 meters. 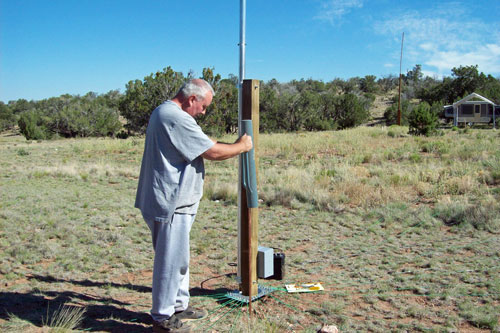