The MMR-40 is a transceiver designed by KD1JV for the ARRL Homebrew Radio Challenge. It won the Non-Computerized category of the contest. It features both CW and SSB operation, with VFO frequency control and 5 watts output. I ordered one of the original kits from QRPKits.com when they first became available. I now see that they have an enhanced version of the kit available that has a steel case and Digital Dial included.

The first step of assembly for me was to install the nuts that hold the brass screw which serves as the tuning rod in the Permeability Tuned Oscillator. This radio is a little unique, in that it uses a brass screw and hand-wound coil to control the frequency. 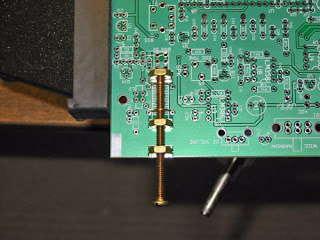 It is important to make sure you leave enough space between the back two nuts that the nylon coil form has a little play in it. Once the screw and nuts were in place, I soldered the nuts to the board. 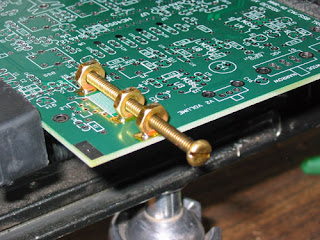 The next step was to wind the coil on the nylon spacer that serves as its form. Here is the coil form screwed onto the brass screw to serve as a handle to turn it. The whole assembly is loosely in an F type connector so it could turn while being held in my vise. 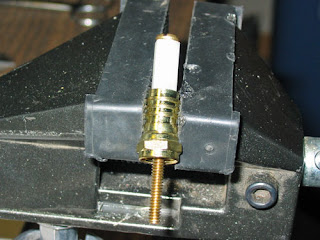 About 40 turns of the smaller, #32 wire fit nicely between the holes in the form. I had to take pictures and blow them up on the computer to count the turns. It was too many to count as I went. 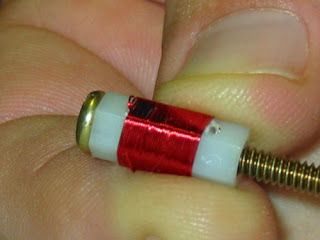 Next, the coil form was placed between the two back nuts, and the screw was threaded through the whole assembly. A nylon nut on the back side holds it in place, and keeps it from trying to spin with the screw. 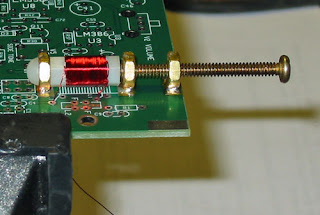 The MMR-40 uses a band switch to select the upper or lower parts of the 40 meter band. This allows the tuning rate to be slow enough to easily tune in signals, while still allowing coverage of almost the entire 40-meter band. The band selector switch goes on the bottom of the board. 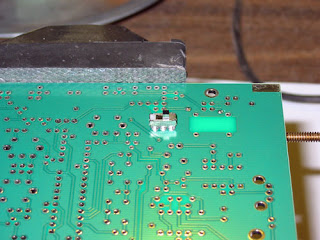 To bring the coil into the 40 meter band without having to wind even more turns onto the form, a second coil is placed in series with the first to increase the total inductance. The second coil is wound on a toroid to save space and windings. As this is a Hartley oscillator, it also has a tickler winding to provide the required feedback for the oscillator. 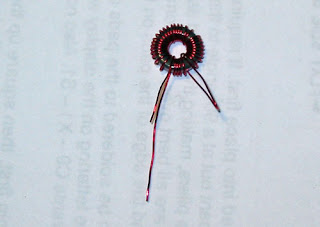 Once that coil was mounted, I installed the components for the power supply voltages needed to test the oscillator. 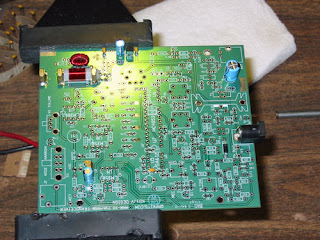 Then, the rest of the PTO components were placed on the board, and it was fired up for testing. 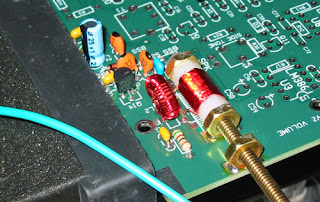 By spreading or compressing the turns on the toroid, you are able to change the start frequencies and bandwidth of the two segments. The final frequency is equal to 10 MHz minus the PTO frequency. The PTO Frequency is in the range of 2.7 to 3.0 MHz. My code speed isn't up to keeping up with the guys below 7.025 Mhz, so I sacrificed that part of the band for more coverage at the upper end of the band.

For an initial setting, I was able to adjust as follows: